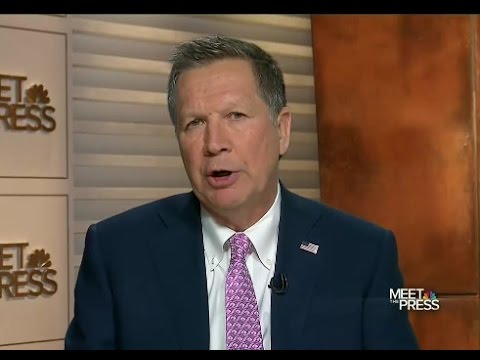 Sunday, on NBC’s “Meet the Press,” Republican presidential candidate Gov. John Kasich said his rivals Donald Trump and Sen. Ted Cruz should end their campaigns and consolidate behind his candidacy.

TODD: Ted Cruz’s campaign is repeatedly called for you to get out, saying a vote for you is a vote for Donald Trump. … If you thought your position in this race strengthened Trump, would you get out?

KASICH: Chuck, I’m beating Hillary by 11 points. I’m the only one that can win in the fall. And as you noticed the narrative over the last week has been what is wrong with the party. Kasich’s the guy that can win the general. Some people have said Kasich would be the best president. I mean get out for what?. If I’d gotten out Trump would be the nominee, he would have won Ohio. And frankly, we’ll win some districts in Wisconsin. We will move to Pennsylvania where I’m basically in a statistical tie with Trump. And when we go to New York and everywhere else, we’re going to pick up delegates. It’s absurd. It’s absurd. You know, if you really want, let them consolidate behind me because frankly I’m the one that can win in the fall. And I’m the one that can get the crossover votes.