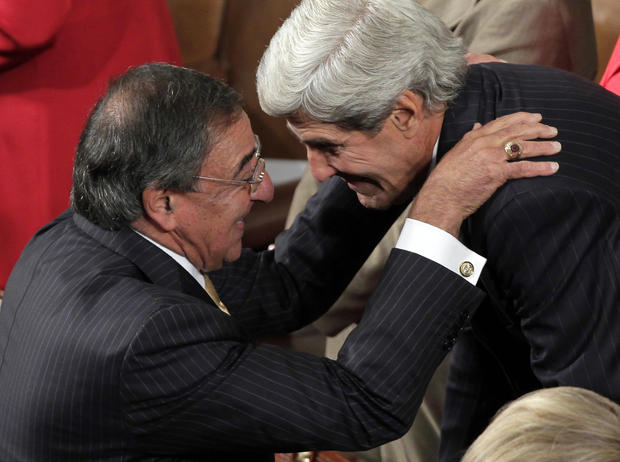 Former Secretaries of State John F. Kerry and Madeline Albright, along with other former top national security officials including Leon Panetta entered the fray over President Donald Trump’s travel ban early today with an unusual declaration stating that it “undermines” national security and will “endanger U.S. troops in the field.”

The 6-page joint declaration was addressed to the U.S. Court of Appeals for the 9th Circuit in support of the temporary order blocking implementation of Trump’s ban on entry for travelers from seven predominantly Muslim countries. The executive order was blocked by a U.S. District Court judge, prompting the government to appeal in what is becoming an epic and unprecedented battle over executive power.

The declaration came as the state of Washington, which initially sought the restraining order, formally responded to the administration’s appeal. The government’s brief is due later Monday.

While the declaration by the officials is not part of the formal pleading in the case, it is clearly meant to counter the government’s argument that continuing to block Trump’s executive action will cause great harm to the nation’s security.

Numerous “friend of the court” briefs have been filed in case as well, the latest by 97 major tech companies.

The group implicitly took strong issue with the Trump administration’s claim that a similar approach had been taken by President Obama during his administration, for whom they all worked.

Others signing the declaration in addition to Kerry, Albright and former Secretary of Defense and CIA director Panetta, were John E. McLaughlin, deputy director of the CIA from 2000-2004 and acting director in 2004; Lisa O. Monaco, former assistant to President Barack Obama for homeland security and counterterrorism, Michael Morell, a career CIA official who has served as deputy director and acting director; former Homeland Security Secretary Janet Napolitano and Susan E. Rice, President Obama’s ambassador to the U.N. and national security adviser.

“We all agree that the United States faces real threats” from terrorist networks and that vetting is necessary, they said in the filing.

“We all are nevertheless unaware of any specific threat that would justify the travel ban” established by the executive order. Rather, they said they viewed it as one that “ultimately undermines the national security of the United States rather than making us safer.”

Specifically, they said, the order will “endanger U.S. troops in the field” who “fight alongside allies in some of the named countries who put their lives on the line to protect Americans.”

It will “disrupt key counterterrorism, foreign policy and national security partnerships that are critical to our obtaining” intelligence necessary to combat terrorist groups like the Islamic State, they declared, and “endanger intelligence sources in the field” by “breaching faith” with them.

They described Trump’s order as one of “unprecedented scope. We know of no case where a President has invoked his statutory authority to suspend admission for such a broad class of people . . . In past cases suspensions were limited to particular individuals or subclasses of nationals who posed a specific articulable threat based on their known actions and affiliations.”