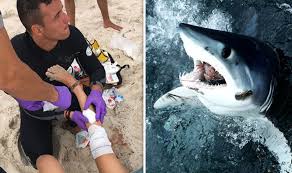 Just when you thought it was safe to go back into the water… What appears to be the first shark attacks in New York waters for 70 years left two children in need of emergency surgery Wednesday, though both will fully recover.

The kids, aged 12 and 13, were swimming miles apart along Long Island’s Fire Island National Seashore when they were attacked. Both suffered puncture wounds to their legs and were hospitalized, but have since been discharged. The girl, Lola Pollina, said she was standing in waist-deep water at Sailors Haven Beach in Brookhaven when she was bitten.

“I saw something, like, next to me, and I kind of felt pain, and looked and I saw a fin,” she said, recounting how she realized her leg was “all bloody.” The shark she saw was about three- or four-feet long, she said. Only about 10 cases of shark bites on humans have ever been documented in New York state, the last one in 1948, said Ian Levine, chief of the Ocean Beach Fire Department. Neither of Wednesday’s incidents have been officially confirmed as a shark attack, but Levine said: “The tooth we pulled out of the kid’s leg looks like a shark’s tooth.” Read more at the New York Daily News.