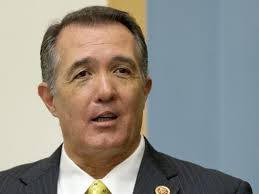 House Rep. Trent Franks is calling on Republican lawmakers to sign a letter asking either Sen. Marco Rubio or Sen. Ted Cruz to drop out of the presidential race in order to defeat frontrunner Donald Trump.

The Arizona Republican sent a letter Wednesday evening, arguing one candidate should continue his campaign while the other would be named as a vice presidential candidate.

“The laws of mathematics will not be repealed in this election cycle,” the letter reads. “The mathematics in this equation are clear to the reasoned mind: The two of you can unite and win together or remain apart and fail together.” Read more at Politico.