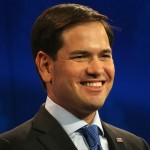 GOP presidential candidate and Florida Sen. Marco Rubio responded Monday to criticism from the left that he and other Republicans say America is at war with all Muslims.

The war, he said is with radical jihadists, who are motivated by their interpretation of Islam.

The Egyptian military calls ISIS radical Islamists “because that is what they are,” Rubio said. “It is important to identify who they are and what they’re motivated by, because if you are not going to acknowledge what motivates your adversary, then you can’t come up with a strategy to defeat them.”