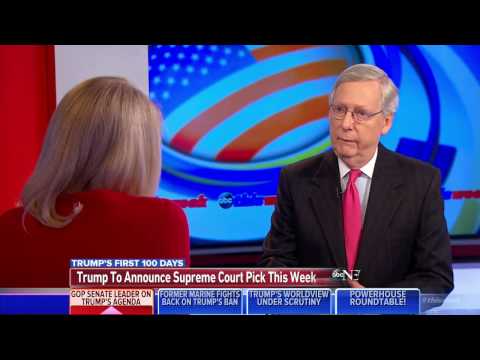 Senate Majority Leader Mitch McConnell, R-Ky., today cautioned that the United States does not have a religious test for entry into the country but stopped short of rejecting President Donald Trump’s order to halt the admission of refugees and citizens of seven Muslim-majority countries.

McConnell said that Muslims, both in the United States and abroad, are key allies in the fight against terrorism and urged caution in regard to Trump’s plan to implement “extreme vetting” for refugees from countries where a majority of the citizens are Muslim.

“I don’t want to criticize them for improving vetting,” McConnell said on ABC’s “This Week.” “I think we need to be careful. We don’t have religious tests in this country.”

The comments come after a day of silence from McConnell on the issue. He did not offer any reaction in the early hours when the order caused mass chaos and outrage as Muslims were turned away at airports across the country. Republican leaders are facing intense criticism for backing the measure, which has been interpreted by some Democrats, human rights leaders and activists as effectively a ban on Muslims.

McConnell is one of a growing number of Republicans who have urged caution in implementing the order to block citizens from Iran, Iraq, Syria, Yemen, Sudan, Somalia and Libya from entering the country for at least 90 days. He refused Sunday to reject Trump’s order in its entirety and left it to the courts to decide its legality.

“Ultimately it is going to be decided in the courts as to whether or not this has gone too far,” McConnell said.

McConnell is among those who strongly opposed the concept of a Muslim ban when Trump touted the idea during the campaign. His decision to back the order, at least in part, is generally in line with that of House Speaker Paul D. Ryan, R-Wis., who announced his support on Friday.

Ryan said that while he supports the refugee resettlement program, he thinks it is time to “re-evaluate and strengthen the visa vetting process.”

“President Trump is right to make sure we are doing everything possible to know exactly who is entering our country,” the speaker said in a statement.

A growing number of other prominent Republicans have raised serious concerns about the decision to ban people traveling from the seven countries listed in the order.

Sen. Rob Portman, R-Ohio, also stopped short of criticizing the order, but he suggested that the action wasn’t fully thought through by the Trump administration.

“You have an extreme vetting proposal that didn’t get the vetting it should have,” Portman said Sunday on CNN’s “State of the Union.”

Portman said that he supports the rulings by several federal judges staying the part of the order that affects legal permanent residents and visa holders and prevents them from entering the country.

“I think that’s appropriate,” Portman said of the judicial orders. “And let’s allow those people who have come here legally in this country to get out of detention – allow them to go to the Cleveland Clinic, for instance, as this doctor was banned from doing so.”

Concerns that the order was not properly reviewed were shared by Senate Armed Services Committee Chairman John McCain, R-Ariz., who called the process “confused.”

“The good news is that its only got to do with a pause,” McCain said on CBS’s “Face the Nation. “The bad news is obviously this process and these conclusions were not vetted.”

McCain said he worries that the order could bar Iraqi soldiers who are working with the United States from entering the country and that the chaos could become part of marketing efforts for ISIS and other terrorist organizations.

“I think the effect will probably in some areas give ISIS some more propaganda,”McCain said, using an alternative acronym for the Islamic State. “I’m very concerned about our effect on the Iraqis right now.”

Sen Jeff Flake, R-Ariz., voiced some of the most vociferous objections to the order in a Saturday evening post on the blogging site Medium. Flake, a longtime opponent of the Muslim ban proposed by Trump, said the administration is right to be concerned about national security but said the measure too broadly blocks those who have already been vetted.

Sen. Ben Sasse, R-Neb., also supported Trump’s focus on protecting the country’s borders and backed connecting “jihadi terrorism” with Islam and particular countries. However, he said, the order is “too broad.”

“If we send a signal to the Middle East that the U.S. sees all Muslims as jihadis, the terrorist recruiters win by telling kids that America is banning Muslims and that this is America versus one religion,” Sasse said in a statement released Saturday. “Our generational fight against jihadism requires wisdom.”

Sen. Mike Lee, R-Utah, said he has “technical” questions about how the order will be implemented but supports its purpose.

Others, including Sen. James Lankford, R-Okla., announced tepid support and concerns on Twitter.

“We should value freedom & not surrender security. We can protect the homeland while upholding #religiousfreedom & refuge for the persecuted,” Lankford tweeted.