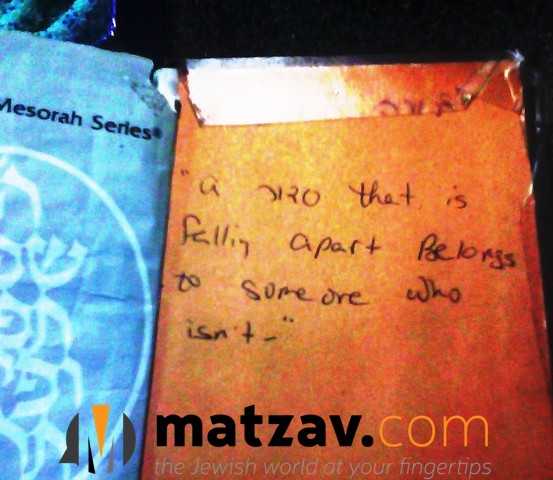 This past week, Rabbi Moshe Brodsky went to be menachem avel the family of Mrs. Devora (Plym) Goldstein a”h, a beloved wife, mother and friend, who passed away after battling serious illness for 4-1/2 years. She was just 43 years old.

Mrs. Goldstein was a special woman, whose outstanding nature, sensitivity and deep-seated faith were attested to at the shivah by all who merited to know her.

At the shivah in Lakewood, NJ, Mrs. Goldstein’s husband, Rav Avrohom, brought out his wife’s siddur. Rabbi Brodsky noticed that it was very worn, but what moved him even more was what was written on the inside cover by Mrs. Goldstein herself: “A siddur that is falling apart belongs to someone who isn’t.”

What a remarkable lesson taught by a remarkable person. Mrs. Goldstein had written it privately as chizuk for herself, but now that inspiration will spread to others, who will try to emulate the manner in which she personified those special words.

The above is reprinted from R’ Yitzchok Hisiger’s popular weekly Food for Thought column, which appears in Yated Ne’eman.