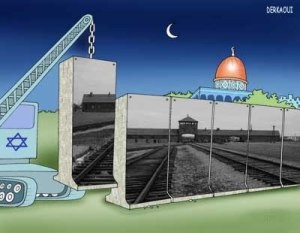 In an interview Monday in the New Yorker – focused mainly on the behavior of the United States in the aftermath of last July’s nuclear deal between Iran and world powers – Zarif, who served as chief negotiator of the agreement, dismissed a question put to him by interviewer Robin Wright about the cartoon contest.

Zarif also asserted that the “NGO” in question “doesn’t need a permit to hold the function,” claiming only, “We need to issue visas for people who come, and we take into consideration that people who have preached racial hatred and violence will not be invited.”

When asked why Iran allows a Holocaust cartoon festival to be held at all, Zarif shot back, “Why does the United States have the Ku Klux Klan? Is the government of the United States responsible for the fact that there are racially hateful organizations in the United States? Don’t consider Iran a monolith. The Iranian government does not support, nor does it organize, any cartoon festival of the nature that you’re talking about. When you stop your own organizations from doing things, then you can ask others to do likewise.”

TIP’s Ceren scoffed at Zarif’s claim. “The idea that the Islamic Republic has some kind of free speech right is an insult to the thousands of Iranians who have been beaten, arrested, raped and murdered in recent years for trying to express themselves inside Iran,” he told The Algemeiner.

The first international Holocaust cartoon contest was held in Iran in 2006, following the controversy surrounding the publication of Muhammad cartoons in the Danish newspaper Jyllands-Posten on Sept. 30, 2005.

The event was sponsored by the Iranian daily Hamshahri, which announced it was holding the competition in response to “Western hypocrisy on freedom of speech.”

The second Holocaust-themed cartoon contest was held after the massacre of the staff of the satirical French publication Charlie Hebdo in January 2015, and the publication’s subsequent decision to continue publishing caricatures of Mohammed.

The 11th Tehran International Cartoon Biennial, sponsored by the capital city’s municipality and hosting participants from 50 countries, is scheduled to take place in June. Its winner will receive a $50,000 cash prize.