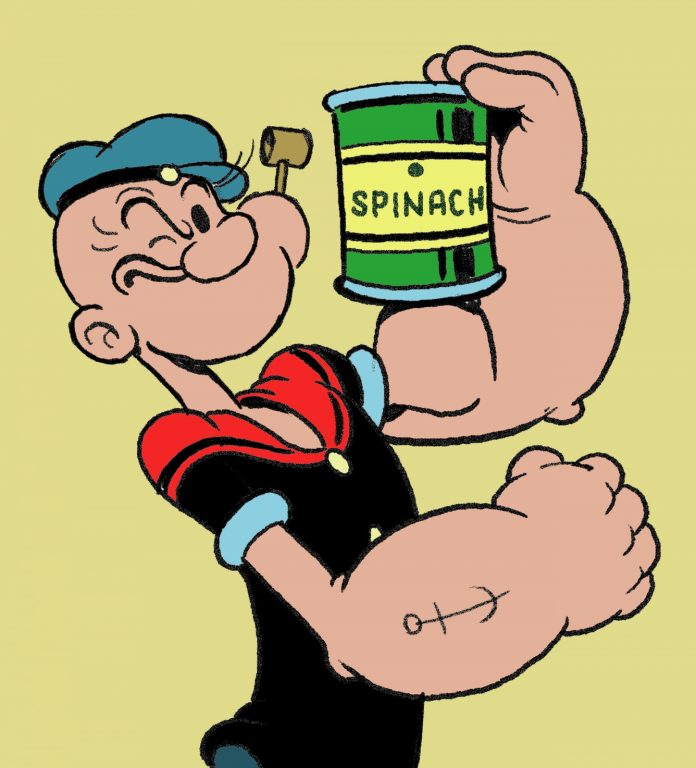 MIT researchers have engineered a bionic plant that can detect explosives and send a warning signal – without wires! – to scientists nearby.

Talk about spinach as superfood, Popeye!

In a new paper in the journal Nature Materials, the scientists explain how they can turn plants into bomb-sniffing machines with the help of tiny cylinders of carbon that can detect “nitroaromatics” – chemical compounds often used in explosives. As the plant absorbs air and groundwater from the environment around it, the carbon tubes will register any nitroaromatics and begin to emit a fluorescent signal. The signal gets picked up by an infrared camera and relayed to a small computer or smartphone, which then sends an email to the user.

“This is a novel demonstration of how we have overcome the plant/human communication barrier,” paper co-author Michael Strano, a chemical engineer at the Massachusetts Institute of Technology, said in a statement. Though he and his colleagues worked with spinach plants, “you can apply these techniques with any living plant” to turn them into any kind of sensor, he said.

The technique takes advantage of an ability that plants have spent hundreds of millions of years honing: “Plants are very good analytical chemists,” as Strano put it.

Unable to move around in search of food or in response to threats, plants must be very good at monitoring their environments and exploiting nearby resources. Their extensive root networks and sophisticated internal transport systems mean that they’re constantly sucking up water – and anything else that’s in the soil – and sending it to their leaves. A plant is a better groundwater sensor than pretty much any machine a human can build.

The trouble is that plants aren’t able to tell humans about what they find in the soil. So Strano and his team developed tiny nanosensors made of carbon, which can be tailored to be sensitive to various dangerous compounds. They’ve made sensors that detect nitric oxide – a pollutant produced by combustion – as well as hydrogen peroxide, the explosive TNT and sarin gas, a colorless, odorless chemical that disrupts the nerve system and is used as a chemical weapon.

When the target molecule hits the carbon-nanotube sensor, it binds with a polymer wrapped around the tube, changing the type of radiation it emits when it’s viewed with infrared light.

In the new study, Strano and his colleagues embedded nanotubes inside the spinach plants by painting their leaves with a solution full of the tiny sensors, which the leaves then absorbed into their photosynthetic regions. Some of the sensors emitted a constant fluorescent signal, while others were designed to respond only to nitroaromatics. This allowed researchers to quickly compare the signals and determine whether the sensors had detected anything.

They doused a plant’s roots in nitroaromatic contaminants and waited. After about 10 minutes, the nanotubes began to emit infrared light.

That light was detected by a Raspberry Pi – a small $35 computer similar to the one inside a smartphone – hooked up to an infrared camera. But Strano said it could just as easily work with a cellphone camera with its infrared filter removed. The setup can sense signals from plants up to a meter away, and Strano’s lab is looking to increase that distance.

Plants may seem like an unlikely variation on bomb-sniffing dogs. But Strano thinks there’s a lot they can tell us, if we can only figure out how to help them sent the message.

“Plants are very environmentally responsive,” he said in a statement. “They know that there is going to be a drought long before we do. They can detect small changes in the properties of soil and water potential. If we tap into those chemical signaling pathways, there is a wealth of information to access.”