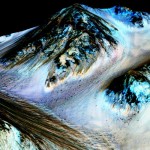 NASA has discovered signs of liquid water on Mars, it announced at a press conference this week. “Mars is not the dry, arid planet we thought,” NASA official Jim Green announced.

Liquid water has never been detected outside of Earth. NASA found evidence that water formed dark streaks on the Martian surface known as as recurring slope lineae.

“The discovery we’re talking about today is most exciting because it suggests it would be possible for life to be there today,” scientist John Grunsfeld said.

The University of Arizona’s Alfred S. McEwen and other authors of a 2011 study that suggested sloping lines seen on the Red Planet are formed by liquid water appeared at the conference. Read more.