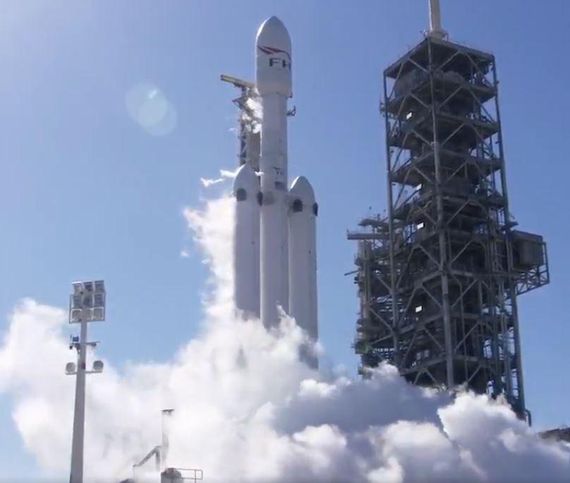 A year after NASA announced that it would allow companies to market products on orbit as well as open the International Space Station to private citizens, the space agency said Monday it is well on its way to transforming the orbiting lab into a commercial hub.

NASA has five proposals from companies for commercial and marketing opportunities on the station. One of those is currently there, the agency said in a news release Monday.

Also on Monday, Virgin Galactic, Richard Branson’s space tourism company, announced that it has signed an agreement with NASA to identify people who might want to fly to the space station as well as preparing them for the mission, joining others that are trying to help promote private flights there.

The moves come as NASA is moving aggressively to leverage the growing capability of the commercial space sector, which for years has flown cargo and supplies to the space station. Last month, SpaceX became the first private company to fly NASA astronauts there.

Private companies are also trying to build commercial habitats in space. NASA administrator Jim Bridenstine recently announced on Twitter that the space agency would fly its astronauts on suborbital spacecraft, such as those being developed by Virgin Galactic and Jeff Bezos’ Blue Origin, as part their training. (Bezos owns The Washington Post.)

The space agency is also seeking to partner with the private sector in its return to the moon. Earlier this year, it awarded nearly $1 billion in contracts to three companies to develop spacecraft capable of taking astronauts to and from the lunar surface.

In a statement, NASA said that “providing expanded opportunities at the International Space Station to manufacture, market and promote commercial products and services will help catalyze and expand space exploration markets for many businesses.”

NASA would not say what companies have submitted marketing proposals or what the efforts entail. An agency spokesperson said NASA recognizes that it must be transparent with the public about the activities on board the station, in which taxpayers have invested more than $100 billion. But at the same time, if it unveils a companies’ advertisement or marketing plan prematurely, it will reduce the incentive for those companies to use the space station.

NASA also has not said who the private astronauts are that Axiom Space would send to the station. In March, the company said it had signed a contract with SpaceX to fly a “commander professionally trained by Axiom alongside three private astronauts to and from the International Space Station.” The mission is set to launch as early as the second half of next year and the crew would “experience at least eight days of microgravity and views of Earth.”

Bridenstine has said Axiom is working with Tom Cruise to film a movie on board the station, but the company has not confirmed that. It is expected to make an announcement on the crew members for its flight next month.

NASA’s promotion of the space station for private use is an abrupt about-face for the space agency, which for years went to great lengths to prohibit corporate interests in space. Even as its astronauts gobbled M&Ms in space, NASA steadfastly stayed away from endorsing any particular product or company, referring instead to “candy-coated chocolates” out of fear of appearing to favor one brand over another.

For years, NASA had prohibited private citizens from the station, though Russia allows it and has over the years flown several people there.

The flights won’t be cheap. NASA has said it would charge $35,000 a day for passengers to stay aboard the station. And the rides there could cost some $50 million, officials have estimated, though that would be determined by the two companies NASA has hired to fly astronauts to the station, SpaceX and Boeing.

In an interview, George Whitesides, Virgin Galactic’s CEO, said the company’s astronaut training program would build on its work developing a suborbital spacecraft it calls SpaceShipTwo.

The company has flown the vehicle to the edge of space twice, and it has some 600 people who have paid for trips, or put down significant deposits toward the tickets, which can cost as much as $250,000.

“We put a huge amount of thought into our training program for SpaceShipTwo,” he said. For the orbital flights, the company would look at “creating something that is safe, comprehensive, educational but also really fun and has a lot of style.”