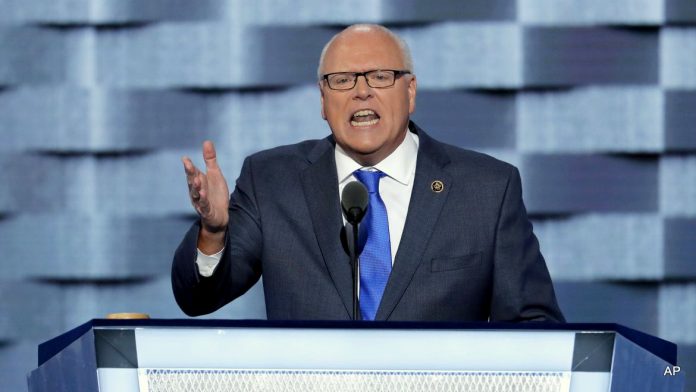 The chairman of the House Democratic Caucus said Friday that reports that the Trump administration had considered deploying tens of thousands of National Guard troops to apprehend illegal immigrants were “outrageous” and “very reminiscent of what led up to World War II.”

Rep. Joseph Crowley, D-N.Y., made the statement in an interview for C-SPAN’s “Newsmakers” program shortly after the Associated Press broke news of the draft Department of Homeland Security memo.

White House press secretary Sean Spicer said the memo was “not a White House document” and that “there is no effort at all to round up, to utilize the National Guard to round up illegal immigrants.”

But Crowley said “seeing these kind of actions . . . even being talked about” was alarming.

“Using the National Guard, the Army, to come into our communities, to police our communities, to disrupt and to gather people up for the purpose of deporting them, is a very, very scary thing,” he said. “It’s not a country that I’m familiar with called the United States. It’s not how we conduct ourselves. We see that happen in other countries that aren’t as free and aren’t as open as we are to welcoming immigrants. We welcome immigrants. We want the best, the brightest and the bravest. . . . And now they’re under fear that armed [men], you know, with M16 rifles, come to your door and break it down and leave your children who are American citizens there but take you and deport you.”

Pressed on the comparison to the run-up to World War II – a reference that could easily be interpreted as a reference to Nazi Germany – Crowley backed off only slightly: “I think we have to always look at our past and look at the history of the world, to put into context where we are today. I’m not describing and saying this is like Germany per se, or making any comparison to Nazis or anything else. What I’m saying is that we as a people have to be concerned about the use of our military to usurp the authority of our police departments. When anyone is suggesting that, that is something to be very, very concerned about.”

The remarks on the immigration order came amid a wide-ranging interview where Crowley repeatedly expressed concern about President Donald Trump, about his alleged ties to and apparent sympathies for Russia and about whether congressional Republicans would provide checks on his administration.

“When the president omits the mentioning of the Jewish people in the Holocaust remembrance, and there’s not a peep from a Republican member of the House? That’s disturbing,” Crowley said, noting that Democrats attempted to bring a resolution to the House floor addressing the omission. “They refused to take that up, they dismiss it. The president continues to dismiss it. That’s not going away. . . . I think they’re tremendously scared of him.”

At other points, Crowley accused Trump and members of his administration of “lying to the American people over and over again” and said the next four years would be “very, very rocky, if he gets to four years.”

Crowley spoke a week after House Democrats met in Baltimore to lick their wounds after losing the presidency and failing to win the House majority for the fourth consecutive election cycle. He acknowledged that “there was a good bit of soul-searching going on” at the policy retreat and that, “Even a few months after the election, we’re still finding our way.”

But Crowley said the onus was on Trump and Republicans, given their control of Washington, to approach Democrats about finding a governing consensus, and he said Trump’s actions after one month in office had given Democrats little reason to work with Trump to get things done.

He made reference to a string of Sunday talk-show appearances last week by presidential adviser Stephen Miller, who said in a CBS interview that “the powers of the president to protect our country are very substantial and will not be questioned.”