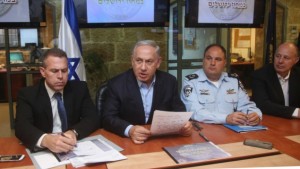 [Update below.] Israeli Prime Minister Bibi Netanyahu on Wednesday night ordered police to prevent Israeli ministers and members of Knesset from entering the Har Habayis, in a move seemingly aimed at reducing recent sky-high tensions between Israelis and Palestinians.

The ban does not apply to Muslim Knesset members, however, who will still be allowed to access the al-Aqsa Mosque at the site.

The order comes as Israel has suffered from a surge in Palestinian terror attacks against Israelis and violent clashes between security forces and Palestinian rioters in Yerushalayim and across the West Bank.

On Wednesday alone, five separate terror attacks wounded a total of seven Israelis across the country.

Over the past week, four Israelis were killed in attacks in the West Bank and the Old City of Yerushalayim and at least four more were injured, including a toddler. Read more at Times of Israel.

UPDATE: The Prime Minister’s Office clarified on Thursday that Netanyahu’s directive to ban ministers and MKs from the Temple Mount until further notice applies to Jewish and Arab Knesset members alike.

“The decision stems from intentions to cool the atmosphere around the Temple Mount. In recent days, Netanyahu has prevented public Palestinian figured from visiting the Temple Mount,” his office said.