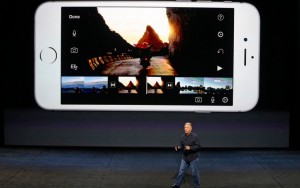 Apple announced the release of the iPhone 6S at a press event Wednesday. The phone will feature a pressure-sensitive screen called 3D Touch that will allow users to pull up shortcuts and menu options from the home screen more easily.

Additionally, Apple announced the release of the iPhone 6S Plus, a revamped Apple TV, the Apple iPad Pro (complete with an Apple Pencil, akin to a stylus), and software update, IOS 9. Read more at The Verge.