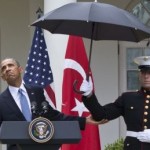 Barack Obama is the longest-serving president to see no major hurricane strike the U.S. mainland during his time in office, according to records dating back to 1851 from the National Oceanic and Atmospheric Administration’s (NOAA) National Hurricane Center (NHC).

In the six years and seven months since Obama began his presidency on Jan. 20, 2009, no major hurricanes, defined as a Category 3 or above, have made landfall in the U.S.

In the period since 1851, only four chief executives prior to Obama had no major hurricanes strike the continental U.S. during their presidencies–but none of them were in office as long as Obama has now been. These four were: Abraham Lincoln (1861-1865); Andrew Johnson (1865-1869); James Garfield (who served only six months prior to his assassination in 1881); and Benjamin Harrison (1889-1893).

Obama is marking the 10th anniversary of Hurricane Katrina today with a visit to New Orleans during a record 118-month major hurricane drought.

2005 was the busiest hurricane season on record. But ever since Hurricane Wilma came ashore in Florida two months later, on Oct. 24, 2005, no major hurricanes have struck the mainland U.S. and there is little likelihood that any will do so this year.