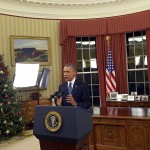 As reported earlier here on Matzav, President Barack Obama used his Sunday night address on terrorism to reassure the American people that the San Bernardino shootings last week appear to be an isolated incident, despite one of the killers pledging allegiance to ISIS.

The president firmly dismissed a change in strategy in the war against the extremists that would require combat troops on the ground in Iraq and Syria.
And while terrorist group is made of “thugs and killers” and is part of a “cult of death,” he again refused to call them “radical Islamic terrorists.”

Americans must not take out their grievances with the fanatics on followers of Islam, he said.

“Muslim Americans are our friends and our neighbors are coworkers, our sports heroes. And yes, they are our men and women in uniform who are willing to die in defense of our country,” the president said, speaking from the Oval Office. “We have to remember that.”