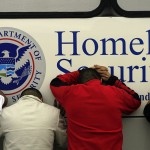 Government figures show the Obama administration this year has deported the fewest number of immigrants of the any year since 2006, the AP reported Tuesday.

Though President Obama previously said he planned to focus on deporting criminals living in the country illegally, data shows deportations of criminal immigrants have fallen to the lowest numbers since he took office in 2009.

The internal figures, which span the period between Oct. 1, 2014, and Sept. 28, include an estimated 136,700 convicted criminals deported in the last 12 months.

More than 2.4 million immigrants have been deported under the Obama administration, but total deportations have steadily declined in the last three years. The Department of Homeland Security has not yet publicly disclosed the new figures, AP reports. Read more.