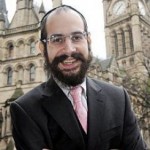 A former Conservative councillor has said he wants to be Ukip’s candidate in next year’s London mayoral election.

Shneur Odze will run to be the party’s candidate for City Hall, and to be a London Assembly member when voters go to the polls in May 2016.

He stood for Ukip in last year’s European elections and was the only strictly Orthodox candidate in Nigel Farage’s party.

Odze was previously a Tory councillor in Hackney, north London. Now based in north-west London, he said the campaign to be mayor had “only just started.

“Everyone has applied and there is a long-list. At the party conference there will be a shortlist and people will be named.”

He said he would be campaigning for improved public transport and infrastructure.

“Why has London not yet got driverless tube trains? Our roads are gridlocked. It’s about making London great for the 21st century,” Mr Odze explained.

But is the capital ready for a strictly Orthodox Jewish leader? According to Mr Odze, Londoners will vote for the person most capable to do the job, regardless of their background.

“I think London is ready for the most competent and talented person who puts themselves forward,” he said.

“You can make a case for or against anybody. It’s about their policies and abilities to lead a great city.”

The Lubavitcher was elected to Hackney Council more than a decade ago at the age of 21. In 2004 he was suspended from the council after raising concerns about postal voting abuses and later moved to Manchester.

After several election defeats he became disillusioned with the Tories and drifted away from politics before returning as a Ukip candidate.