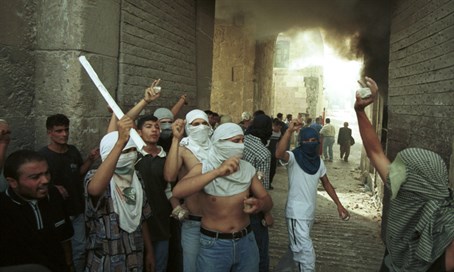 The Fatah movement, which rules the West Bank-based Palestinian Authority, has called for violence in response to next week’s US-sponsored economic workshop in Bahrain.

The conference is intended to be the first stage in the Trump administration’s long-gestating Israeli-Palestinian peace plan. Representatives of several Arab states are set to take part, along with an Israeli business delegation. The Palestinian Authority is refusing to attend.

“The program of activities against the Bahrain Conference and the deal of the century. On Sunday, Monday, and Tuesday, June 24, 25, and 26, 2019. An escalation of the confrontations with the Israeli occupation in all districts of the homeland as a sign of opposition to the deal of the century and the workshop in Manama,” the post said.

Fatah also held a conference titled, “The Holocaust of the Century in Bahrain… Its Signs, Consequences, and Ways to Deal With It.” At the conference, the Bahrain summit was called “a holocaust for the basic Arab principles and the Palestinians’ rights” and “the Holocaust of the century,” a reference to Trump’s reference to Israeli-Palestinian peace as the “deal of the century.”

In an article published last week by the official Palestinian Authority newspaper, Fatah Revolutionary Council Secretary Majed Al-Fatiani said his group was “committed to leading the struggle to stop the great plot that is being woven against our people.”

He added that the Palestinians would use “all means” — a phrase that is often a euphemism for terrorism — against the Bahrain meeting, and called on “the Fatah members and the vital forces on the Palestinian lands to [dedicate] the 24th, 25th, and 26th [of June] to Palestine and Jerusalem, in order to express their rejection of the Bahrain Conference.”