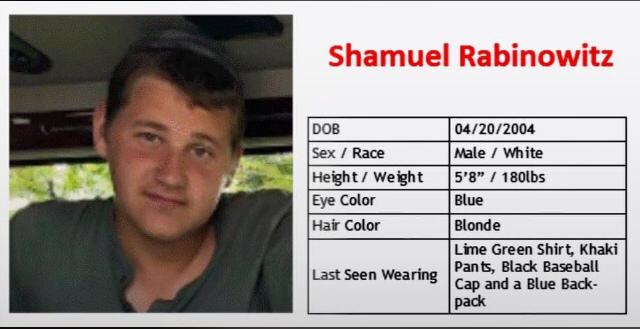 Update: The search for 15-year-old Shmuel Rabinowitz who went missing in Vermont ended after he was found by a hiker who recognized the boy from signs placed in the area.

Shmuel was found in good condition and is being brought back to the command center where he will be reunited with his family.

Shmuel Rabinowitz, a 15-year-old boy bochur who is a talmud at Mesivtas Kerem Menachem in Montreal, has gone missing while hiking near Killington, Vermont, with the yeshiva’s summer program after he got separated from the hiking group last night.
A group of more than 20 members from Rockland Chaveirim are heading to assist the locals police force, who are searching with K-9 units. The Chaverim of Rockland takes special training courses to specialize in mountain and forest rescues.
Numerous organizations from Lakewood, Monsey, Monroe and more have offered to provide aid for the search.

Anyone with information about Shamuel’s whereabouts or who may have seen an individual matching his description is asked to contact the Vermont State Police Rutland Barracks at 802-773-9101.

Michoel Nagel, Director of the Pioneers Camp in Vermont has released a statement about a camper who has gone missing.

I want to let everyone know that our foremost responsibility is every campers physical and spiritual safety and well being. I am writing this letter to inform everyone that one of our teenage campers was separated from the group on an overnight hike about an hour away from camp. I want everyone to know that part of preparing for any activity involves emergency preparation and training which this group participated in before starting this overnight hike.

As soon as the report came in that a camper had gotten separated from the group the authorities were notified. A full-blown search and rescue operation is underway led by the Vermont State police and in coordination with many local first-responder agencies. Chaverim branches in New York have also been mobilized to help out.

I’ve been in direct contact with the lieutenant leading the rescue operation and he is very confident that the camper will be found. We want to reassure you at this time that all the other campers are safe. We ask the entire pioneers family to daven for Shmuel ben Chasha. At this time our entire camp staff is busy maintaining the camp program. We will keep you apprised of the situation going forward.