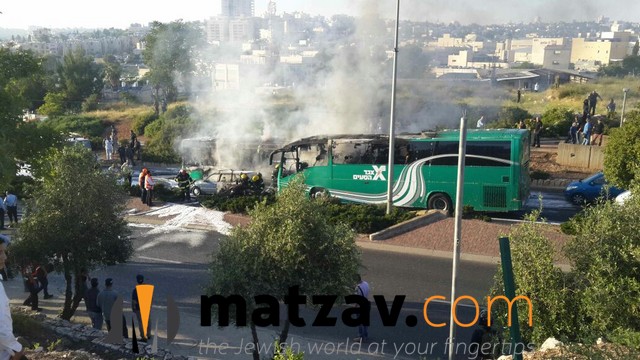 Israeli Police now confirm that the bus explosion in Yerushalayim that wounded about 20 people was caused by an explosive device placed by Palestinian terrorist.

This follows remarks earlier from Mayor Nir Barkat earlier that the blast was not due to an accident, but rather due to an explosive device at the back of the bus.

There are an average of 200 cases of spontaneous combustion of buses a year in Israel. The incident was thus initially thought to be such a malfunction. But that claim was later rejected.

Yerushalayim police chief Yarom Halevy said, “When a bomb explodes on a bus, it is a terror attack.”

Yerushalayim had, boruch Hashem, seen several weeks of quiet on the terror front, but if this was indeed a terror attack, it would break a period of calm in the city after a six-month wave of violence.

Matzav.com Israel spoke to a member of Zaka, who remarked at the great neis that occurred with the bus being empty.

“Bus#12 had no passengers,” he said. “Can we even imagine how many more would have been hurt, or killed, had the bus been full at the time of the explosion?”

Yoram Halevy said, “At this point of the investigation, we are trying to find out who placed the explosive load and how they reached the bus. We are in full deployment of the district forces and prepared for every scenario.”

A seriously wounded Arab from eastern Jerusalem was found on the bus without any ID, and this has added to the police’s suspicions as to the nature of the attack.