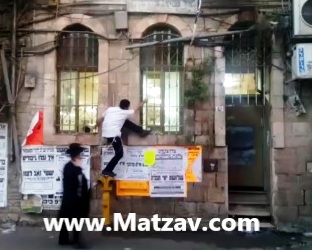 Police raided an illegal wedding taking place on a Meah Shearim roof where a 15-year-old groom was about to marry a 13-year-old kallah. The girl’s father complained that he had been unable to locate her for the past two months.

Police detained and later released members of the “shawl community” involved in the match, whose women cover themselves in voluminous dresses and shawls.