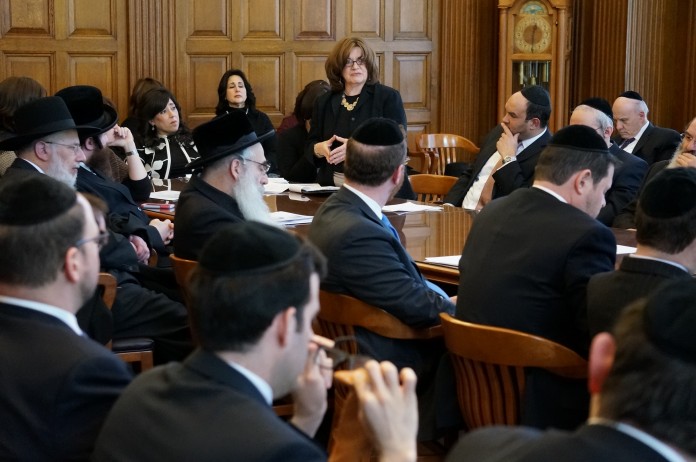 >>Follow Matzav On Whatsapp!<<
New York Governor Andrew Cuomo has appointed of Mrs. Leah Steinberg, director of Agudath Israel’s Project LEARN, to the DDAC (Developmental Disabilities Advisory Council). An official announcement of her appointment was made in Albany by the Governor’s Office during Agudath Israel’s day-long advocacy effort at the State Legislature in early March.
The DDAC serves in an advisory role to the Commissioner of OPWDD (Office For People With Developmental Disabilities) in all areas affecting service delivery, housing and education for individuals with lifelong disabilities.
Mrs. Steinberg accepted the appointment saying, “I look forward to helping our community, with our unique needs, receive optimum service from the OPWDD.”  She added that in her Council appointment, she anticipates “being able to help a broader range of people, as the OPWDD services individuals from birth through life, in all areas of life.”
As director of Project LEARN for the past 15 years – a post she will retain in addition to her new appointment – Mrs. Steinberg’s mandate is to help people with special needs from ages 3-21.
In pursuit of this aim, she worked with legislators in Albany, as well as the New York City Mayor’s office, to streamline the special education tuition reimbursement process so that parents of special needs children enrolled in nonpublic schools would no longer have to go into debt to lay out tuition funds for their special needs child.  Those efforts resulted in a vastly more effective and expedient reimbursement process that has completely altered the landscape for special needs families.
Mrs. Steinberg has also worked on getting special education services into mainstream schools, partnering with the New York City Department of Education until she succeeded in getting P3 group rates as well as service increases for eligible yeshiva children. She also serves as co-chairman of the subcommittee to the chancellor on special education in non-public schools.
Her determination to leave no stone unturned in helping special needs children won the respect of the Commissioner of OPWDD as well as that of legislators on both sides of the political spectrum.
At a recent Agudath Israel Breakfast in the Five Towns featuring Senate Majority Leader John Flanagan, the senator singled out Mrs. Steinberg for special recognition. As former chairman of the Senate’s Education Committee, the senator had extensive contact with Project LEARN’s director, and observed her many achievements. He praised her as “a wonderful person who’s accomplished so much for special needs education…an absolute champion.”
“For the special needs population in our community entitled to OPWDD services, the knowledge that they will now be represented by a dedicated advocate who has historically gone the extra mile for them should bring new hope,” said Rabbi Chaim Dovid Zwiebel, Agudath Israel’s executive vice president. “We are certain Mrs. Steinberg will be an unqualified asset to the Council and wish her much success.
{Matzav.com}