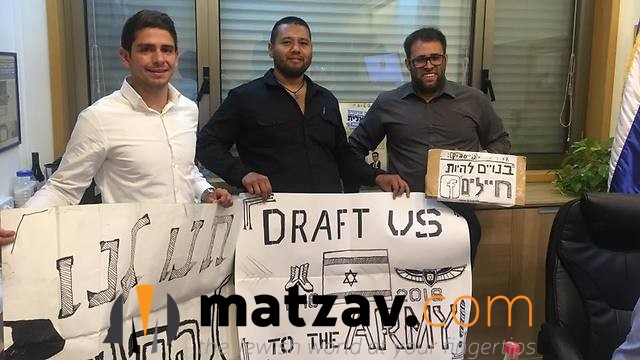 Two determined immigrants have been sitting outside Defense Ministry headquarters (the Kirya) in Tel Aviv for five weeks, and they have sworn to remain there until the IDF allows them to enlist.

“We are absolutely determined to make this a success,” declared Navon Kaplan. “There is no such thing as giving up and we won’t until we become soldiers.”

Kaplan, 28, from Texas and Felipe Rodriguez, 27, from Australia are both seeking to enlist in the IDF and have taken to camping out in a tent outside the Defense Ministry headquarters in Tel Aviv until the army relents. They hope that social pressure upon the government will aid them in their effort.

Kaplan moved to Israel in 2011 and enlisted as an Iron Dome operator. After a year and a half of service, he was discharged early when his weight ballooned to 150 kilograms. He subsequently shed 45 kilograms hoping to return to service, but he says that the IDF informed him that at age 25, he was disqualified from returning to his unit.

“Since then, I have been fighting tooth and nail with the bureaucracy, with the government, and using all the connections that I could possibly find, but nothing has worked,” said Kaplan. “Everyone wanted to help, but nothing worked until I heard about Yoni Zarka, and I decided to do the same with the hope that it might work.”

Yoni Zarka is a French immigrant who protested daily outside the IDF induction center in Ramat Gan until the IDF finally relented and allowed him to enlist despite the fact that he was 34 years of age.

The army had also refused to allow Felipe Rodriguez to enlist due to his age. He decided to join Kaplan after seeing his Facebook posts about the matter.

“I do not believe that enlisting at my age is impossible,” Rodriguez contended. “I have heard so many stories of people in their late twenties enlisting in the IDF and getting into combat units.”

The pair have refused to give up for five weeks, spending every day at the same spot at the Kirya beneath a giant banner demanding that they be permitted to enlist and spending nights in their tent nearby.

“It’s extremely hot out here, it’s humid, but it doesn’t matter. This is the price we are willing to pay,” Kaplan insisted.

The IDF, on the other hand, has claimed differently. The IDF Spokesperson’s Unit told TPS that Rodriguez was rejected for additional reasons not connected to his age, and Kaplan had simply finished the service for which he had originally signed. The pair vehemently deny those claims and have provided TPS with IDF documents that show that they have been rejected because of their age.

The duo have found a sizeable online following at their Facebook page, “Built to be Soldiers” and visited the Knesset this past week, meeting with government ministers, many of whom were supportive of their cause.

“Deputy Defense Minister Rabbi Eli Ben-Dahan said that age is unimportant and said that he knows of several people older than us doing their mandatory service. He has agreed to join our battle and to start fighting,” recounted Kaplan.

“I am determined, and I am not moving from here until I can finish my three years, and not only three but maybe more,” Kaplan reiterated. “I want to prove myself and become an officer.”

Article reprinted with permission from TPS.