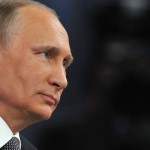 Russian President Vladimir Putin said Friday that Syrian leader Bashar al-Assad has accepted conditions for early elections and power-sharing with his political opposition, in what looks like an attempt to woo greater international cooperation to defeat the self-proclaimed Islamic State.

“There is a general understanding that joint efforts in the fight against terrorism should go hand by hand with the political process in Syria,” Putin said.

The announcement comes soon after Russia said it was increasing engagement in Syria. International plans for resolving the crisis triggered by the six-year civil war call for Assad to give up nearly all power. Read more at Bloomberg.