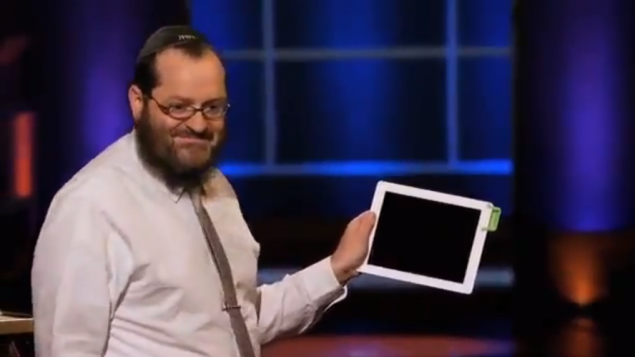 Rabbi Moshe Weiss, a motivational speaker and the inventor of ‘SoundBender,’ which garnered an investment on ‘SharkTank,’ has passed away. He was 41 years old.

The Sound Bender accessory amplifies sound on the iPad.

The rabbi-turned-entrepreneur was seen on “Shark Tank” several years ago.

Proudly sporting a yarmulka and beard, he was seen entering the offices of the FUBU Collection to meet its owner and his business partner Daymond John.

“Who would have thought that a rabbi from St. Paul, Minnesota, would be flying down to New York City for a sales meeting with Daymond John,” Moshe said at the time.

His personal charm and ingenuity won him a $54,000 investment in his company from fashion mogul Daymond John in March 2013. The simple magnetic, power-free amplifier improves sound quality and clarity on iPad tablets.

Moshe, a Lubavitcher chossid who worked as a school teacher, saw great success from there. Read more about SoundBender here.

Rabbi Weiss away in his hometown of S. Paul, Minnesota.

A yeshiva student in his youth, he studied at Yeshiva Ohr Elchonon Chabad in Los Angeles and at the Rabbinical College of Australia and New Zealand. He later enrolled at University of St. Thomas to study special education. He taught at the now defunct Yeshiva High School of the Twin Cities located in Cottage Grove, Minnesota.