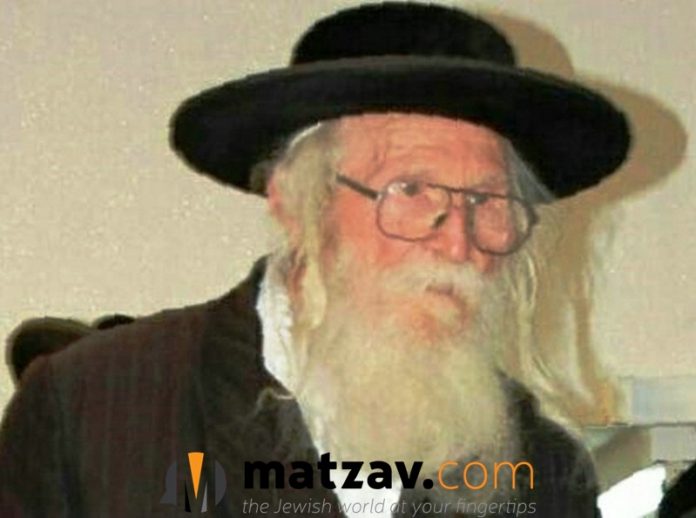 With the inspiring leadership of Rav Aharon Yosef, the daily minyan at the Ohr Hachaim Hakadosh’s shul took what would otherwise be a simple tourist site and upheld the tremendous kedusha of the makom kadosh.

Rav Aharon Yosef, a descendant of the famed Brizel family of Yerushalayim, a mishpacha meyucheses which traces its lineage to the Aryeh D’vei Ilo’ih, passed away today. He was in his eighties.

Rav Aharon Yosef was well-known in Yerushalayim and elsewhere around the globe for his tremendous yedios haTorah, his devotion to helping and guiding so many people, and for the hanhagos of gedolei Eretz Yisroel that he observed firsthand due to his close kesher with them.

Rav Aharon Yosef’s father, Rav Elozor, one of the ziknei Yerushalayim, was rosh yeshiva of Yeshiva Be’er Halacha in Yerushalayim. Rav Elozor spent many years decades ago traveling around Eretz Yisroel being mashpiah on those who had strayed from Yiddishkeit. Rav Aharon Yosef followed in his father’s footsteps, using his kochos to help people and draw people closer to Yahadus.

Rav Aharon Yosef’s ability in Torah and hadracha was recognized decades ago by Rav Eliezer Yudel Finkel zt”l, Rosh Yeshivas Mir, who, at that time, asked him to join his son, Rav Aryeh Finkel, in starting a special night yeshiva for bochurim.

In his younger years, Rav Aharon Yosef learned in the Kaminetz Yeshiva in Yerushalayim. He also merited to spend time by the Brisker Rov, the Steipler Gaon, the Tchebiner Rov, Rav Aharon of Belz, and Rav Shlomke Zvhiller.

Throughout his life, Rav Aharon Yosef was bound, heart and soul, to Karlin Stolin and to the admorim of the chassidus.

Rav Aharon Yosef was known to thousands of American bochurim and yungeleit who, while learning in Eretz Yisroel, benefited from his Torah, hadracha and his warm persona. Talmidim of Yeshivas Brisk, Mir, Rav Dovid Soloveitchik and other yeshivos were regaled by the many stories and hanhagos that he related from the gedolim of the previous generation who he merited to share close relationships with.

Each Erev Rosh Chodesh, Rav Aharon Yosef devoted time to daven at the kever of the Ohr Hachaim Hakadosh on behalf of his acquaintances and those who came to him for help.

Rav Aharon Yosef was renowned for his pragmatic approach regarding chinuch habonim v’habanos. During his drashos on chinuch, he held his audiences spellbound, as he analyzed, in a simple and easy-to-understand manner, the intricacies of educating children, providing ideas and suggestions that are practical and applicable.

His passing brings to a close a life of ahavas Hashem, ahavas habriyos, tzidkus, and constant kiddush Hashem.

The levaya was held today at the Karlin Stolin Bais Medrash on Rechov Avinoam Yellin in Yerushalayim.