[Video below.] It is with great sadness that we report the passing of Rav Yehoshua Yeshaya Neuwirth zt”l at the age of 86.

Rav Neuwirth was best known as the author of the classic and groundbreaking seforim “Shemiras Shabbos Kehilchasah,” based on the pesakim of his rebbi, Rav Shlomo Zalman Auerbach zt”l. 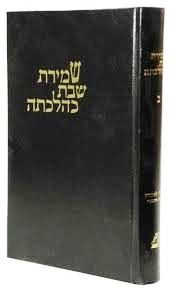 Rav Neuwirth was born on 14 Adar in 1927 in Germany to his parents, Rav Aharon and Tziporah Neuwirth. His father served as a rov and dayan in various communities, including Halberstadt and Amsterdam.

With the onset of war, Rav Neuwirth fled with his parents, two brothers and sister to Holland, where they hid for three years. They ultimately made their way to Eretz Yisroel on a ship out of Marseilles.

During his youth, Rav Neuwirth studied at Yeshiva Kol Torah, where he became a close talmid of Rav Shlomo Zalman.

Rav Neuwirth resided in the Bayit Vegan neighborhood of Yerushalayim and served as the posek of Shareei Tzedek Medical Center, among other positions he held.

With the publication of his classic sefer, Rav Neuwirth introduced a new format for learning the halachos of Shabbos. In this sense, Rav Neuwirth was a trailblazer, creating a new genre in published halacha. Previous seforim for the general public were organized according to the Shulchan Aruch, while Rav Neuwirth organized his sefer by topic, providing a clear index, and also embellishing the text with thousands of marei mekomos and comments.

Rav Neuwirth had been scheduled to serve as a sandek this morning at the bris of a great-grandchild. The bris has been postponed until after the levaya.

The levaya will take place at 11:30 a.m. at 10 Rechov Rav Bergman in Bayit Vegan and kevurah will follow on Har Hazeisim.