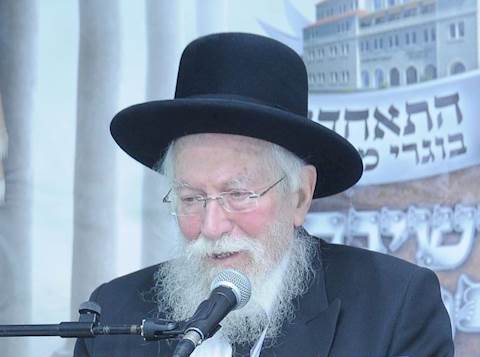 It is with great sadness that Matzav.com reports the passing of Rav Zalman Nechemia Goldberg zt”l, renowned rov and posek.

Rav Zalman Nechemia was a phenomenal talmid chochom, whose grasp of Shas and halacha were unique in his time.

Rav Zalman Nechemia was 88 years old, having passed away at Hadassah Ein Kerem Hospital in Yerushalayim.

Last weekend, he was taken to the hospital after suffering a stroke. He fell and suffered bleeding in his head. Unfortunately, he never recovered.

Rav Zalman Nechemia, a son-in-law of posek hador Rav Shlomo Zalman Auerbach, had a rare phenomenal memory, which stood out since his childhood.

Rav Zalman Nechemia was born in Minsk, Belarus, and immigrated to Eretz Yisroel at the age of five. Before immigrating, he met with the great Rogatchover Gaon, an experience he would often recount.

In his youth, he studied at Yeshiva Tiferes Tzvi in Yerushalayim and then at Yeshivas Ponovezh and Yeshivas Chevron.

For many years, he served as editor-in-chief of the Encyclopedia Talmudis and rosh kollel of Kollel Shevet Mechokek.

He also served for many years as a chief dayan of Rabbinical High Court in Yerushalayim, where he issued pesakim on issues of gittin and other matters.

Rav Zalman Nechemia was formerly the rosh kollel of the Sadigura Kollel Daas Moshe and headed the Yerushalayim College of Technology (Machon Lev) and the Institute for the Higher Study of Halacha (Machon Iyun Ha’Halacha) in Yerushalayim. He also gave shiurim at Yeshiva Kerem B’Yavneh and Or Etzion.

He had a career of unending harbotzas haTorah, limud haTorah and psak halacha, spending his life in the daled amos shel halacha.

Rav Zalman Nechemia is survived by his rebbetzin and their family.

The levayah will be held tonight at 9:30 p.m. at the Shamgar Funeral Home in Yerushalayim, followed by kevurah on Har Hazeisim.