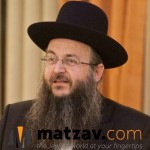 It is with great sadness that we report the passing of Rav Zelig Leib Braverman zt”l, rov of Kehillas Shaarei Tefillah in Modiin Illit. He was 52.

Rav Braverman was raised in Meah She’arim, Yerushalayim. He was a son of Rav Nosson Braverman.

As a young man, he studied at Ponovezh Yeshiva in Bnei Brak and was a talmid of Rav Elazar Menachem Man Shach zt”l.

He married his wife, a daughter of Rav Dovid Tzvi Ordentlich, rov of Betar Illit, and established a home of Torah and fear of Heaven.

He established a yeshiva in Bnei Brak and later moved to Modi’in Illit various kollelim.  A few years ago, he awas appointed as rov of Kehillas Shaarei Tefillah in Brachfeld.

He is survived by his wife, Rebbetzin Bracha, and ten children.

The levaya was held last night at his own on Rechov Sdei Chemed in Kiryat Sefer, and then at his shul on Rechov Yehuda Hanosi in Kiryat Brachfeld, followed by kevurah in the Ponovezher Bais Hachaim in Bnei Brak.