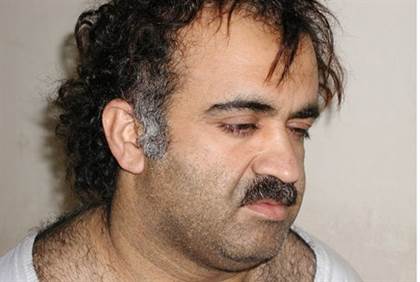 Khalid Sheikh Mohammed, the alleged mastermind of the Sept. 11, 2001, attacks, wrote a letter to President Barack Obama in 2015 that accused the United States of bringing the attacks upon itself, calling them a “natural reaction” to “destructive policies.”

Even though the 18-page letter was penned in 2015, it was only recently sent to the White House during the final days of Obama’s presidency after its delivery was ordered by a military judge at Guantanamo Bay, according to a report in the Miami Herald, which published the letter Wednesday.

Mohammed, who is in the midst of a series of pretrial hearings, is one of the handful of remaining detainees at the U.S. military’s prison in Cuba. He starts the letter by calling Obama an “evildoer” and says it is beneath him to address the letter directly to the 44th president.

Some of the highlights from the letter are below.

“You have escaped from being prosecuted for your own brutal and savage massacres against the American Indian and your crimes in Vietnam, Korea, Tokyo, Hiroshima, Nagasaki, Dresden and Latin America; and for your support for the Chinese dictator, Chiang Kai-shek, and Mexico’s dictator, Santa Ana. But Allah helped us to defend ourselves and attack your most significant military and commercial targets in your land for your crimes in our lands. You can keep your military bases in Japan, Germany, Italy and elsewhere, but Muslim land will never accept infidels’ army bases in their land.”

“You have been killing Muslims in Palestine for 60 years: expelling more than 4 million Palestinians; destroying their homes, schools, mosques and markets by supporting Israel militarily, economically and politically; and by protecting all of their crimes through the U.N. Security Council. In return for those 60 years, Allah aided us in conducting 9/11, destroying the capitalist economy, catching you with your pants down, and exposing all the hypocrisy of your long-held claim to democracy and freedom.”

–On the media and Abraham Lincoln:

–On the war in Iraq:

“You turned Iraq into a blood-soaked canvas. Did your predecessor find any weapons of mass destruction in Iraq? No, but they found an excellent site for the largest American embassy in the world, built to serve the employees of the oil companies that profit from the oil-rich resources of the Iraqi people, profits that flow to the lobbyists and pressure groups who hold the keys to your office. Did your predecessor find any evidence demonstrating direct cooperation between the government of Iraq and al-Qaida as your intelligence and secretary of state erroneously claimed? You and your allies have broken Iraq into a thousand pieces.”

“May Allah have mercy upon Sheikh Osama bin Laden, a man of morals and principles, in war and in peace. He succeeded in targeting New York City, the capital of your economy, without destroying any schools, hospitals, retirement homes or churches, nor any residential area in a city with a population of over 8 million. Compare this with the conduct of the U.S. Air Force, where 100 percent of the victims of many of their bombardments were children, e.g., the 12 children killed in Kunar Province while they were collecting firewood, the 23 women and children killed in Yemen, and those killed at a wedding ceremony in Nangarhar Province. Moreover, Nader Nadery of the U.N. identified only 80 civilians killed in night raids by U.S. Special Forces in 2010 in Afghanistan, but the true number is probably over 400.”

–On the bin Laden raid:

“The entire world watched your morals in that when you made a decision to kill Sheikh Osama bin Laden without trial and watched the lawyer-president make a decision to throw his body in the sea.”