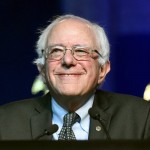 Democratic presidential candidate Sen. Bernie Sanders slammed Republican candidate Ben Carson for his comments on “Meet the Press” that it’d be a mistake to elect a Muslim president.

“You know, this is the year 2015,” Sanders said at his new campaign office in New Hampshire. “You judge candidates for president not on their religion, not on the color of their skin, but on their ideas, on what they stand for.”

Sanders also condemned the former neurosurgeon’s comments on Twitter, likening his anti-Muslim remarks to prejudice against electing the first Catholic to the White House, John F. Kennedy, as well as Barack Obama, the first African-American president.

Carson’s campaign defended the comments saying the candidate respects the Muslim community, but “there is a huge gulf between the faith and practice of the Muslim faith, and our Constitution and American values.” Read more at NBC News.