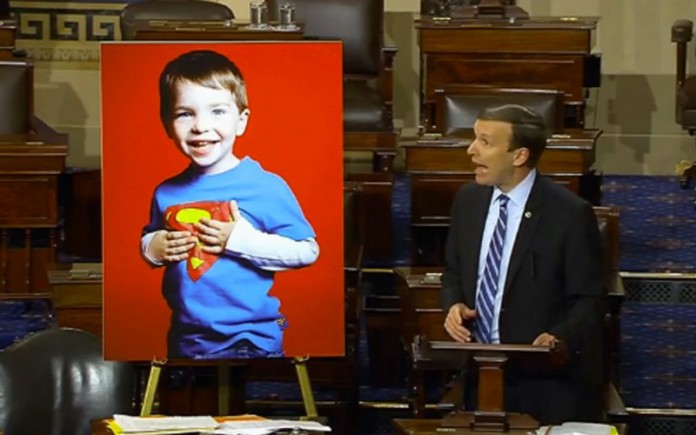 The leader of last week’s 15-hour Senate filibuster to force action on guns said Monday that Democrats need to make gun control an “integral” part of their national security policy as they try to build a political movement to rival the National Rifle Association.

The message, Sen. Chris Murphy, D-Conn., said in an interview with Washington Post reporters, should be that Republicans are partially culpable for attacks like the Orlando nightclub shooting.

“We’ve got to make this clear, constant case that Republicans have decided to sell weapons to ISIS,” Murphy said, using an alternative term for the Islamic State militant group. “That’s what they’ve decided to do. ISIS has decided that the assault weapon is the new airplane, and Republicans, in refusing to close the terror gap, refusing to pass bans on assault weapons, are allowing these weapons to get in the hands of potential lone-wolf attackers. We’ve got to make this connection and make it in very stark terms.”

Murphy made his comments just hours before the Senate was set to vote on four gun-related amendments to a pending appropriations bill – two proposed by Democrats, two proposed by Republicans – that were negotiated to resolve the Democratic filibuster.

Two of those amendments seek to place new restrictions on the ability of those on federal terrorism watch lists to purchase guns. The man who shot 49 clubgoers to death in Orlando this month had been placed on a watch list but was later removed after the FBI concluded he was not a threat.

The Democratic proposal would give the attorney general authority to block the sale of weapons to suspected terrorists; a Republican counterproposal would allow authorities to delay a gun sale to a terrorism suspect for three days; the delay could be longer if a judge ruled during that time that there is probable cause to deny the firearm outright.

Another pair of amendments addresses weaknesses in the federal background check system: Democrats back a proposal to expand mandatory checks, while Republicans want to increase resources for conducting background checks without changing the rules.

None of the four proposals are expected to win the 60 votes necessary to advance in the Senate, and Murphy acknowledged that he was girding for a long, difficult fight.

Murphy said he was “encouraged” by compromise discussions being led by moderate Sen. Susan Collins, R-Maine, but not hopeful that they would be productive: “I would be be very surprised if there are enough Republicans who are willing to break with the NRA and (Senate Majority Leader Mitch McConnell) is willing to call something to the floor that would likely not have the support of the gun lobby.”

“Ultimately, we’ve got to build a political infrastructure on our side that rivals that of the gun lobby,” he said. “I want to win some votes along the way, but everything we do needs to be in service of creating a political powerhouse that ultimately beats the NRA on the big stuff. There’s such a laundry list of things that have to change from our perspective. We can’t get all that done unless we have a political potency that rivals the gun lobby. And we’re not there yet.”

Murphy, who fought for tougher background checks after the 2012 mass shooting at Sandy Hook Elementary School in his home state, said he has sought to use the filibuster to bring new members and new support to advocacy groups seeking to counter the NRA’s influence.

Democrats have long criticized Republicans for their solidarity with the NRA. Senate Minority Leader Harry Reid, D-Nev., said in a Monday floor speech that GOP lawmakers are “beholden to the National Rifle Association, the NRA, and not the people who elected them to come here and represent them.”

Monday’s votes “will be the third time, recently, Senate Republicans have protected the gun lobby even as their own constituents have been gunned down in cold blood,” he said. “Senate Republicans ought to be embarrassed – but they’re not, because the NRA is happy.”

McConnell, also speaking on the Senate floor, dismissed the Democratic gun amendments as attempts to “push a partisan agenda or craft the next 30-second campaign ad.”

“No one wants terrorists to be able to buy guns or explosives,” he said, arguing that Republicans are “approaching this serious topic in a serious and constitutional way” and that “ultimately the most important way to prevent more terrorist tragedies at home is by defeating terrorism overseas.”

Murphy said a significant number of Senate GOP lawmakers are “true believers” who are not merely toeing the NRA’s line for political reasons. But, he added, “there are enough people who are uncomfortable with the Republican position on guns to get to 60 votes.”

“They’ve got to make an independent decision that the NRA has just gone too far and that the public has changed thus that they are paying more attention than ever before,” he said. “Used to be that you could stick with the NRA and it didn’t matter because people really weren’t going to pay attention to these issues when they went to the ballot box in big numbers. I think that’s changing.”

Murphy said the change could be evident as soon as November, with presumptive Democratic presidential nominee Hillary Clinton running a strongly pro-gun-control campaign.

“The $64,000 question is, how do you make this an issue that doesn’t only come up after shootings?” he said. “I don’t have the answer to that, but I’m pretty sure that if this election comes off with Hillary winning and some other victories for supporters of our cause, it will be an issue that will show up at the beginning of next year, not after the next shooting.”