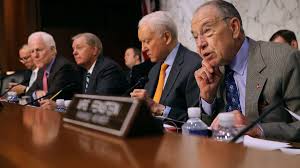 The Senate on Thursday passed three measures to block President Donald Trump from using his emergency authority to complete several arms sales benefiting Saudi Arabia and the United Arab Emirates but fell short of the support needed to overcome a pledged veto.

Trump has cited rising tensions with Iran as justification for using his emergency powers to complete the deals.

A bipartisan group of senators, led by Sens. Robert Menendez, D-N.J., and Lindsey Graham, R-S.C., had filed 22 resolutions of disapproval against the sales – one for every contract the administration had expedited by emergency order, effectively sidestepping congressional opposition. But after weeks of negotiations, Senate leaders agreed to hold just three votes encompassing the substance of all resolutions seeking to block the deals.

Trump, according to congressional aides, would still have to issue 22 individual vetoes even though the Senate resolutions were bundled into three.

The first two resolutions, to prohibit sales benefiting Saudi Arabia and various Western nations, passed 53 to 45 with seven Republicans voting in favor: Sens. Susan Collins of Maine, Graham, Mike Lee of Utah, Jerry Moran of Kansas, Lisa Murkowski of Alaska, Rand Paul of Kentucky and Todd Young of Indiana. Only five of those Republicans backed the third resolution, which sought to block several arms deals also benefiting Jordan, United Arab Emirates and others. It passed 51 to 45. Murkowski opposed that measure, and Lee was not recorded as voting.

The votes came just hours before the White House hosted congressional leaders – including the heads of the Senate and House committees overseeing the military, the intelligence community, and diplomatic affairs – for an Iran briefing.

Senior administration officials have been on Capitol Hill all week briefing lawmakers about rising tensions with Tehran, but overnight reports that the Iranian military shot down a U.S. Navy drone over the Persian Gulf has fueled concerns that the United States might be on the brink of an all-out military conflict with Iran.

Democrats have argued that any arms sales to Iranian nemesis Saudi Arabia and its allies would only worsen such a regional conflict, particularly in war zones such as Yemen that have already turned into proxy battles. But Republican leaders have repeatedly stated their opposition to efforts to scale back the United States’ defense cooperation with Saudi Arabia, including the arms sales – which makes securing a veto-proof, two-thirds majority for the resolutions a difficult endeavor.

Democratic leaders in the House had been waiting to see whether the Senate would have any difficulty passing the resolutions before taking their own steps to block Trump’s actions. But there were no objections to having votes on the resolutions when Menendez raised them earlier this week, putting to rest concerns that Senate GOP leaders might try to challenge the effort on procedural grounds.

The disapproval resolutions are just one of several efforts Trump’s critics will attempt this month to challenge his Middle East policy, as lawmakers await definitive word from the White House about Trump’s next move regarding Iran. When asked Thursday if the United States would respond to the downed Navy drone, Trump was vague, saying, “Let’s see what happens,” before noting that “shooting down the drone . . . this country will not stand for it.”

In Congress, support for military action against Iran has largely broken down along party lines. But some Republicans are still resisting the party’s defense of Trump’s actions concerning Saudi Arabia, even as the threat of armed conflict with its regional enemy, Iran, grows.

Democrats and Republicans have been troubled by Trump’s embrace of Saudi Arabia, which has endured despite international condemnation of its leaders’ reported role in the killing of Saudi journalist Jamal Khashoggi, a Washington Post contributing columnist, and the kingdom’s involvement in Yemen’s civil war.

“I personally feel betrayed,” especially concerning Khashoggi, Graham said Wednesday during a confirmation hearing for Trump’s pick to serve as ambassador to the United Nations.

“There’s no amount of oil coming out of Saudi Arabia and there’s no threat from Iran that’s going to get me back on,” he added, referring to the status quo of the U.S.-Saudi alliance.

At the same time, Democrats are leading a charge to curtail Trump’s warmaking powers, in the hope that doing so will prevent the situation from turning into all-out war.

On Wednesday night, the House passed an appropriations bill that would sunset a 2001 authorization for military force many Democrats worry might be used to justify a military confrontation with Iran.

Later this month, Democrats are expected to try to amend language in a defense bill to prevent Trump from engaging in military hostilities with Iran unless he first seeks congressional authorization.