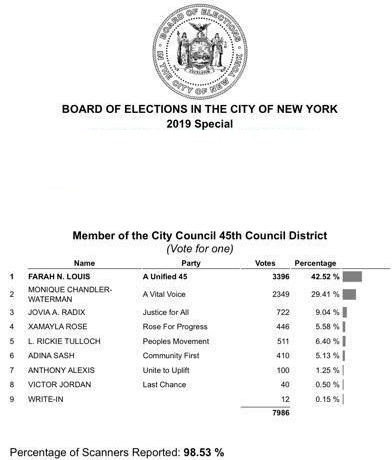 Patch.com reports that Louis defeated Williams’ endorsed candidate, Monique Chandler-Waterman, and six other candidates in the District 45 special election to represent Flatbush, Midwood and Canarsie with 42 percent of the vote, according to the New York City Board of Elections.

Louis claimed 3718 of the 8775 votes counted and beat Chandler-Waterman by more than 1000 votes. Louis, who spent six years in Williams’ City Council office, will serve in the City Council seat through the end of 2019, completing Williams’ last term, but her race is not over: she will face a June 25 primary and a general election in November.