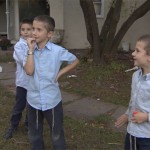 A Spring Valley woman is demanding answers from a bus driver who has been accused of abandoning her 6 and 7-year-old sons on busy Route 306, more than a mile away from the boys’ bus stop.

Rimler’s sons claim their driver, 53-year-old Floyd James, forced them off the bus at the dangerous intersection of Rt. 306 and Brick Church Road.

“When I asked him why did he got off, he said, ‘He was shouting at us and screaming at us, that, ‘I’m not coming back to your houses, and if you want to get home, you should get off right now,'” Rimler said.

“All the kids that were walking, they needed to the bathroom. So like, I was, like, scared,” her son, Eli Rimler said.

Eight boys were allegedly left on the road to fend for themselves. Rimler said she called the bus company when her sons were more than 30 minutes late, but they provided no answers.

The boys finally arrived home more than an hour later.

As the eight boys inched their way on the narrow shoulder on Rt. 306, a woman driving by recognized the Rimler boys and pulled over to take the group home.

“She said the whole bunch of them were hot and sweaty like you can’t imagine,” Rimler said.

Bus driver James has been charged with child endangerment and has been suspended from his job. CBS 2 tried to speak to him, but he was not home Monday night.

His employer, Student Bus Company, wouldn’t comment any further, but the Rimlers said they want the driver fired.