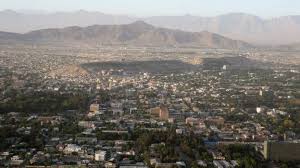 A suicide attack outside a mosque filled with worshipers in the Afghan capital Thursday killed at least two people, officials reported, in the latest attack of its kind against Shiites.

The attack, part of wave of deadly strikes in Kabul in recent weeks, puts further pressure on President Ashraf Ghani’s U.S.-backed government, which is under rising public criticism for failing to prevent the increasing violence.

It took place as worshipers had gathered for special late-evening Ramadan prayers at Al Zahra mosque in the mostly Shiite-dominated area of Dashte Barche, in southwestern Kabul, they said.

There were conflicting accounts as to what happened – residents said the blast was triggered by a suicide bomber on a motorcycle outside the mosque, while police said it took place inside the structure’s kitchen.

Residents said gunfire could be heard from inside the mosque, possibly a sign that other attackers may have entered the complex after the blast to kill survivors.

An interior ministry spokesman, Najib Danesh, said one police officer and one civilian were killed in the explosion. But residents think the toll could be as high as 15.

The Taliban insurgents who fight against the government and U.S.-led troops said they were not behind it, saying the militants “never launch against mosques or any sect.”

Reacting to the attack, Afghans echoed a long-held perception that it was aimed at fanning sectarian violence in Afghanistan, which has suffered from decades of foreign interventions and civil war.

“The attack against Al Zahra mosque is another weapon of the enemy to create discord among Shias and Sunnis,” said Sami Sharaf, a former journalist.

It also showed that the conflict is getting nastier.

“Mosques are supposed to be the safest place on the earth, but the coward enemy is killing us in the place of worship, it can’t get any worse,” Modaser Islami, a social activist, wrote in a tweet.

The interior ministry said it dispatched an elite police force to battle several gunmen thought to have made their way inside the mosque after the initial blast.