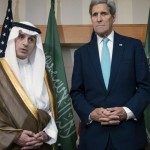 Saudi Arabia threatened military action in Syria on Tuesday, urging President Bashar al-Assad to give up power or face removal by force.

“There is no future for Assad in Syria,” Saudi Arabia’s foreign minister Adel Al-Jubeir told reporters at the UN General Assembly.

Jubeir said there were two options for a resolution, which include either a transitional council or a “military option, which also would end with the removal of Bashar al-Assad from power.”

The foreign minister didn’t elaborate how Assad might be removed, but added that Sadui Arabia is backing “moderate rebels” in the civil war.

The comments came a day after President Barack Obama and Russian President Vladimir Putin squared off over whether Assad should retain power, but agreed to seek out a diplomatic solution to end the Syrian conflict. Read more at the Guardian.