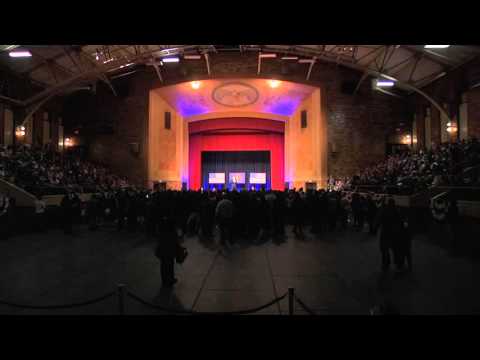 La Porte, Ind. – Sen. Ted Cruz, R-Texas, has a way of handling hecklers. When they walked onstage behind him at a New Hampshire rally, he joked that they’d overshot the Bernie Sanders rally. After scuffles broke out at a canceled Donald Trump rally in Chicago, Cruz said that the protesters being handled at his events had rights and did not need to worry about violence.

But the scene at a “rally for America” Sunday night, organized by the pro-Cruz Keep the Promise super PAC, seemed to throw the candidate off. After a few false starts with a bum microphone, the senator from Texas was gathering momentum, when a 12-year-old boy yelled, “I don’t care!”

Cruz looked into the middle of the crowd. “All right, apparently, there’s a young man who’s having some problems,” he said.

“You suck!” yelled the boy.

At this point, it was unclear why the boy was heckling. (He had no protest sign, though a wall of about 20 protesters was facing the venue.) But Cruz quickly found a way to work the heckle, which continued, into his speech.

“You know, I appreciate you sharing your views,” he said. “You know, one of the things that hopefully someone has told you is that children should speak with respect. Imagine what a different world it would be if someone had told Donald Trump that, years ago!”

The boy kept screaming. “Shut up,” he barked at the adults asking him to quiet down.

“You know, in my household, when a child behaves that way, they get a spanking,” said Cruz, as the boy was finally removed, tucking a baseball cap over his eyes and yelling, “Shut up!” as police hustled him out.