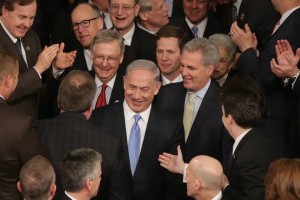 It started off as a routine call between then-House Speaker John Boehner and the incoming Senate majority leader, Mitch McConnell, about ways Republicans in Congress could put the brakes on the nuclear pact President Barack Obama was negotiating with Iran.

Patrick O’Connor and Adam Entous of The Wall Street Journal report on what happened then:

Messrs. Boehner and McConnell had a light-bulb moment: They could undercut Mr. Obama by extending an invitation to Israeli Prime Minister Benjamin Netanyahu to deliver a speech to a joint session of Congress opposing the emerging deal.

The initiative set in motion by Messrs. Boehner and McConnell during the Jan. 8 phone call not only would inflame hostilities between the White House and Republicans in Congress but exacerbate the biggest breakdown in relations between U.S. and Israeli heads of state in decades, as detailed in this Wall Street Journal piece.

Mr. Boehner (R., Ohio) and Mr. McConnell (R., Ky.) knew secrecy was key. If word leaked out, they believed the White House would pressure Mr. Netanyahu to decline. To ensure the invitation would come as a surprise, the leaders decided to tell only their closest aides.

“We knew this would be a poke in the eye,” a person close to the Republican leaders said of the invitation.

The immediate concern was whether Mr. Netanyahu would agree to accept the invitation. Mr. Netanyahu’s relationship with Mr. Obama was already deeply troubled. Initially, the two Republicans weren’t sure the prime minister would be eager to make that situation even worse by entering into a direct political fight with the president in Congress.

When Mr. Boehner called Israeli Ambassador Ron Dermer on Jan. 9, the ambassador said he liked the idea and would sound out the prime minister, according to a person familiar with the call.

From the beginning, Mr. Boehner wasn’t entirely comfortable with what was a clear breach of protocol. Typically, only the White House would extend such an invitation in consultations with Congress. He and Mr. McConnell did not tell the White House about their discussions at any point during the planning, congressional officials said.

(Ironically, the Obama administration had already broken the precedent by inviting the South Korean president to address Congress without first consulting Mr. Boehner.)

Mr. Boehner tapped his chief of staff, Mike Sommers, to serve as the main point of contact for Mr. Dermer in the negotiations. No one else on Mr. Boehner’s staff was told.

This was not the first time Mr. Boehner had invited the Israeli prime minister to address Congress. Early in his tenure as speaker, the Ohio Republican approached the White House about inviting Mr. Netanyahu to speak to a joint session of House and Senate members. The White House dragged its feet before eventually giving Mr. Boehner the green light to extend an invite.

In waiting on the White House, tension developed between Mr. Boehner and his no. 2, former House Majority Leader Eric Cantor (R., Va.). Mr. Cantor, for years the only Jewish Republican in the House, pushed the speaker to demand an answer from the Obama administration, but Mr. Boehner wanted to give the president and his team time to digest the idea.

In the end, Mr. Netanyahu declined the invitation.

The second time, the Republicans knew they would be stirring a partisan hornets’ nest, given the controversy about the Iranian talks.

The Boehner and McConnell teams had decided they would send a formal letter inviting Mr. Netanyahu on Jan. 21, one day after Mr. Obama’s State of the Union address.

On Jan. 20, Secretary of State John Kerry, who led the negotiations with Iran, held a 45-minute meeting with Mr. Dermer, who didn’t say a word about the pending announcement, U.S. officials said.

That afternoon, Mr. Boehner sent final word to Mr. Dermer finalizing plans to made the announcement the next day.

An Israeli official in Washington said the ambassador “felt it would be inappropriate for him to raise the issue with the administration, including in his meeting with the secretary of state, until the speaker notified them.”

In the State of the Union, the president hailed the prospects for a nuclear deal with Iran and warned Congress not to throw obstacles in the way.

“New sanctions passed by this Congress, at this moment in time, will all but guarantee that diplomacy fails, alienating America from its allies, making it harder to maintain sanctions and ensuring that Iran starts up its nuclear program again,” Mr. Obama said.

At the White House National Security Council, then-coordinator for the Middle East, Philip Gordon, reacted with disbelief when told Mr. Netanyahu would address a joint session of Congress on the Iran deal. “No he’s not,” Mr. Gordon said in response. “I talk to Dermer all the time.” In those discussions, Mr. Dermer never mentioned an impending speech, Mr. Gordon said.

An hour after Mr. Sommers told the White House, Mrs. Fallon called Mr. Boehner’s chief of staff back. This time she was not as understanding and scolded Mr. Sommers for going around the Obama administration’s back.

Senior officials demanded answers from their Israeli counterparts. Administration officials thought the idea was cooked up by Messrs. Dermer and Netanyahu, and then proposed to the Republicans in Congress. In fact, it was the other way around, congressional officials said.

Mr. Dermer told his American counterparts it was his impression the speaker’s office would “take care of” informing the White House, according to a former U.S. official.

The National Security Agency was spying on Israeli communications but administration officials say they didn’t learn about the invitation until just before the Jan. 21 announcement.