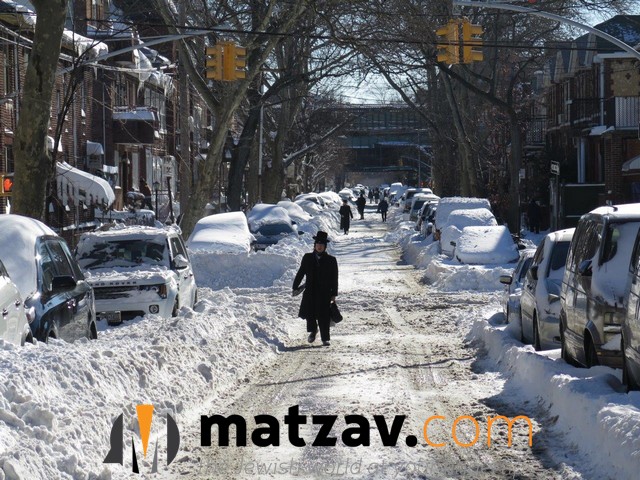 As I trod for several blocks through a few feet of snow and over waist-high snow banks, heading to Shacharis and then again to Maariv at K’hal Adath Jeshurun (KAJ/”Breuer’s”) in the face of a fierce north wind that drove the rapidly falling snow with extreme speed and intensity onto every available surface, so as to assure that any attempts to shovel sidewalks would continue to be in vain, I knew that I would be struck by the impact of this underestimated Shabbos blizzard on the minyanim of Washington Heights. After arriving at KAJ and removing my whitened and soaking outerwear in the vestibule, I entered the shul and behold – virtually everything was the same. Almost everyone was there on time to daven, including men and women who live up steep hills at relatively great distances; Pirchei and Bnos afternoon groups remained on schedule and were well attended; the Avos U’vanim learning program on Motzei Shabbos was pretty full as well, with most everyone there on time, including many men and young boys who live up a steep hill almost half a mile away. One would never know that was a powerful blizzard was raging outside, for on the inside was an unstoppable routine of Avodas Hashem, without compromise, deficiency or delay. This is the impact that struck me and that strikes me every time the community faces a major weather challenge.

I davened Mincha and learned on Motzei Shabbos at a local Nusach Sefard shteibel (Dombrov West) that has much membership overlap with KAJ. Same story there – regular minyanim, same very elderly, middle-aged and young men. What blizzard?…

What is at the root of this sense of commitment?

Although I am not a native of the neighborhood, a friend of mine who is a third-generation “Washington Heightser” exchanged a few words with me after Avos U’vanim, and was shocked at the thought of not going to shul or to Avos U’vanim during a blizzard (unless it is very patently hazardous or the like). “Would a person stay home from work? Of course not. Then why can’t he go to shul!?” was the “obvious” reply.

Although such an attitude is far from obvious to others, it bespeaks a mindset permeated with a charge of “Na’aseh v’nishma” of the highest order, such that one does not deliberate, calculate, consider, weigh the factors, equivocate or make “cheshbonos” when it comes to Torah life; there is no option otherwise – performing the Mitzvos in full form is as much of a person’s being as are his bones, muscles and arteries. It is as natural as breathing. No second thoughts or “shtick”.

This same attitude of no-compromise, and of not even contemplating the idea that others may indeed deliberate and “make cheshbonos”, is what has sustained our nation throughout the millenia. Whether it is the mesiras nefesh of going to shul and learning Torah with one’s children no matter what, of raising generations of large families in an urban neighborhood without an eiruv (KAJ and other local older shuls follow the p’sak that eiruvin are not effective for Manhattan – such was the ruling of Rav Moshe Feinstein, Rav Aharon Kotler, Rav Yosef Dov Soloveitchik of RIETS and his brother Rav Aharon, and so many others), or of living simple and unpretentious lives devoted to Hashem in a society filled with the allure of in-your-face materialism and excessive self-absorption, my local “Yekkishe” (and shteibel) community reminds and teaches me what Kabbalas Ol Malchus Shamayim is all about.

While every Torah community has its own legitimate derech, religious expressions and spiritual values and emphases, which must be respected and appreciated, the lessons learned from the Shabbos blizzard in Washington Heights will always be with me, and, for over 3500 years, have indeed been with us all.

This article first appeared at Cross Currents and was submitted to Matzav by the author.