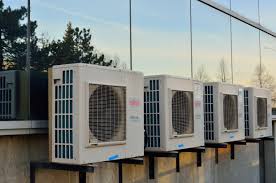 Air conditioning is still a relative rarity in many countries, including those with very hot climates. But as these countries boom in wealth and population and extend electricity to more people, the projections are clear: A huge amount of air conditioning will be installed globally in coming years, not just for comfort but also as a health necessity.

That could have big implications for climate change.

In just 15 years, for example, urban areas in China have gone from just a few percentage points of air-conditioning penetration to more than 100 percent – “i.e. more than one room air conditioner (AC) per urban household,” according to a 2015 report by researchers at Lawrence Berkeley National Laboratory.

Air-conditioner sales are now increasing in India, Indonesia and Brazil by between 10 percent and 15 percent annually, the research noted. Only five years ago, India, a nation of 1.25 billion people, had 5 percent air-conditioning penetration.

“We expect that the demand for cooling as economies improve, particularly in hot climates, is going to be an incredible driver of electricity requirements,” U.S. Energy Secretary Ernest Moniz said in an interview.

In most ways, expansion of air conditioning is a good thing: Protecting people from intense heat – a town in India this month saw temperatures exceed 123.8 degrees Fahrenheit – is essential for their health and well-being. But it also will drive massive energy demand and, potentially, carbon emissions.

Overall, the Berkeley Laboratory report projects that the world is poised to install 700 million air conditioners by 2030 and 1.6 billion by 2050. In terms of electricity use and greenhouse-gas emissions, that’s like adding several new countries.

To try to address this problem, the Energy Department is participating in the Advanced Cooling Challenge, which will be launched Thursday in San Francisco at the 7th Clean Energy Ministerial, a meeting of national energy policy leaders. The goal will be to find creative solutions to lessen the impacts of a trend toward more global air conditioning by making the units more energy-efficient and less dependent on hydrofluorocarbons, or HFCs, as refrigerants. HFCs act as a powerful greenhouse gas in the atmosphere.

“A 25 to 30 percent improvement in efficiency, which we certainly think is technologically possible, can have an enormous difference in terms of, especially, peak demand for electricity going forward,” Moniz said.

That’s partly a function of making already efficient technologies more widely available. For instance, the Berkeley Laboratory report found that some mini-split air conditioners available today in Korea are 50 percent more energy-efficient than the standard model on the market.

India is the biggest country primed for air-conditioning growth and associated greenhouse-gas emissions, said Durwood Zaelke, president of the Institute for Governance and Sustainable Development, which focuses on short-term, high-impact fixes to climate problems. The country experiences extremely hot temperatures but has relatively little air conditioning installed so far.

“If they can focus on the efficient machines, they can save a tremendous amount of power,” Zaelke said.

Zaelke and Moniz say the positive impact for the greenhouse effect will be if the world can restrict HFCs emissions under the Montreal Protocol, the treaty originally adopted in 1987 to address ozone-depleting substances, while improving air-conditioner efficiency overall.

The Berkeley Laboratory study found that if air conditioners become 30 percent more efficient even as nations are phasing out HFCs, that could effectively offset the construction of as many as 1,550 peak power plants.

The study also found that in terms of emissions avoided, this approach would have an even bigger impact than huge renewable-energy projects – saving eight times as many emissions as China’s Three Gorges dam and two times as many emissions as India’s solar initiative. By 2050, meanwhile, the total carbon-dioxide-equivalent emissions avoided could amount to 4 billion tons annually – more than any single country other than China and the United States currently emits. In India alone, 1 billion tons of emissions could be avoided.

Cumulatively, the report found, the world could avoid 98 billion tons of carbon-dioxide emissions by 2050, an amount that could help efforts to keep the planet’s warming below the international target of 2 degrees Celsius.

But how to shift the air-conditioner market to favor greater efficiency? According to Moniz, the world needs not only smart new technologies but also businesses that sell or purchase large volumes of air conditioning to commit to carrying only highly efficient models. Only then will the benefits start to play out on a truly global scale, he said.