This past Shabbos, when we were mekadeish the incoming month of Adar, everyone felt a tinge of happiness. We knew that the snow will soon melt and even those of us who haven’t been to Florida will be able to enjoy warm weather. Soon, Purim will be here and we will celebrate the victory over Haman and Amaleik back in the days of Shushan. Adar is in the air and we all took a breath of relief.

We consider all that has transpired since last Purim and offer a prayer of thanks that we are here. There has been so much sadness and tragedy during the past year. Everyone is looking forward to the simcha of Purim and its story of redemption, hoping that we will soon merit our own stories of restoration and recovery.

This Shabbos, Rosh Chodesh Adar, we read the first of the four special parshiyos, Parshas Shekolim. “B’echod b’Adar,” on the first day of Adar, Chazal instituted that “mashmi’in al hashekolim,” we announce the obligation to donate a half-shekel to the Mishkon.

Essentially, the call for machatzis hashekel is one for achdus. Everyone participates and contributes the same amount. It is for this reason that Chazal say that the mitzvah of shekolim was as a preemptive strike to offset the shekolim that the evil Haman offered Achashveirosh for the right to destroy the Jewish people.

The mitzvah has several angles. Rav Dovid Cohen, rosh yeshiva of Yeshivas Chevron, discusses in the second volume of his monumental Mizmor L’Dovid different aspects of the counting of the Bnei Yisroel, which we read this Shabbos from Parshas Ki Sisa (30:12). Hashem commanded Moshe to take a half-shekel from each person and to count the coins, instead of the people, so that the counting would not cause a plague.

Rabbeinu Bechayeh (ibid.) explains that when people are counted one by one, they are in jeopardy, because then each person has to stand on his/her own merits. However, when a person is counted as part of a group, each person is judged collectively as a member of Am Yisroel and the zechuyos of the entire community allow each person to be judged favorably, as the communal merits accrue to all the members of Klal Yisroel.

The Jewish people are compared to a body comprised of many parts, each one vital. There are bones and sinews, tendons and organs, and the body functions only when they are all working in perfect tandem. As long as they are, the neshomah is present in the body. When different parts of the body break down and cease to perform their functions, the neshomah leaves the body and it dies.

Similarly, when there is achdus among the Bnei Yisroel and we are unified, the Shechinah hovers over us and does not allow a negef. When there is peirud and the Jews separate from each other, the Shechinah departs, and there can be a negef. Counting the Jewish people through their equal donations of half-shekel coins serves to unite them and averts all sorts of unpleasantness.

The Alter of Kelm would famously position himself at the center of the bais medrash on Rosh Hashanah and Yom Kippur. He would say that the strongest source of merit on those days of judgement is the communal strength of a klal. Thus, he ensured that he was part of the klal and would not stand out in any way that would cause him to be viewed independently.

The Alter would quote the Isha Hashunamis who helped Elisha the prophet in his time of need. In appreciation, Elisha asked her if there was any area in which she required a special favor that he could perform for her. She responded, “Besoch ami anochi yosheves – Amongst my people I dwell,” (Melochim II, 4:13). She responded that she was merely one amongst many, for there is no station loftier or more glorious than being a Jew amongst Jews.

Once, when Rav Meir Simcha of Dvinsk was ill, he was asked for his mother’s name so that Jewish communities could pray for his recovery. The great gaon replied with the words of the Isha Hashunamis. He said that rather than specific prayers, he would appreciate tefillos on behalf of all the cholei Yisroel, which would include him and help him as well. He explained that if the tefillos were offered just for him, the Heavenly Court would examine his life as it considered whether he should live. “And who knows if I will be found worthy?” wondered Rav Meir Simcha. “As a Jew amongst Jews, however, everyone is worthy.”

The Alshich, quoting Rav Shlomo Alkabetz in Menos Halevi, says that each person gave a half-shekel for the census so that no one would feel separated from the others. Rather, everyone realized that without the others, he is not whole. Every Jew understands that his soul is intertwined with everyone else’s. Thus, everyone gives a half and, together, the entire group forms a whole being, which nourishes each one if its members.

This is why, say the Chofetz Chaim and Rav Yitzchok Eizik Chover, the silver half-shekel coins each person contributed for the counting were melted down to form the adonim upon which the Mishkon stood. The foundation blocks were not fashioned of the silver which certain people contributed to the Mishkon Building Campaign in response to Moshe Rabbeinu’s appeal. Rather, they were made of the coins that everyone gave equally to symbolize the importance of achdus in establishing the dwelling place of the Shechinah among us.

This use of the machatzis hashekel underscores its special properties. The purpose of the Mishkon was to show the Bnei Yisroel that even after the Eigel, Hashem still loved them because they are collectively His people. After all is said and done, after all the actions and words each Jew performs, we are all equal members of the Bnei Yisroel. The foundation of the Mishkon came from donations that reflected this truth. The contributions caused a realization of our achdus, which is at the foundation of the Mishkon, and thus the Shechinah was enabled to rest among us, hovering over the Mishkon.

For most people, Purim marks one year since we were attacked by the coronavirus. Let us use this period of shekolim and the miracles of Purim, which were fostered by achdus, to do what we can to strengthen unity in our world so that we may merit the return of the Shechinah and its protection from ongoing negef.

This week, we usher in Adar, the month that embodies simcha and achdus. While we are all familiar with the generally accepted Purim-related reasons for the increase of joy during this month, the Sefas Emes offers an interesting illumination. He says that since the Jewish people annually donated their half-shekolim to the Mishkon during Adar, it became a month of joy because their acts of donating caused them to be besimcha.

We recreate that simcha by reading the parsha of shekolim as Adar commences. We strengthen our commitments to each other and experience the satisfaction felt by a baal tzedakah. The parshiyos of nedivus lev lead into a season of joy.

During this month of marbin besimcha, let us concentrate on finding things to be happy about. Let us remember that we are ma’aminim bnei ma’aminim. We are people of deep faith. We know that just as sure as melting follows snow and sun follows rain, there is always a reason to hope and our faith will definitely be rewarded.

The Kamenitzer rosh yeshiva, Rav Yitzchok Scheiner, whose memory is fresh in our minds, spoke about his memories of the Chazon Ish. He related that besides his amazing brilliance, tzidkus and everything else that the Chazon Ish is famous for, “upon meeting him, you were overwhelmed by the impression of a freilicher Yid, with a face that radiated happiness.”

The Chazon Ish was encumbered by many personal hardships, which were compounded by him listening to challenges and tzaros of the people who flocked to him seeking advice, consolation and support. How was the sickly, weak, poor man able to always radiate happiness? The Chazon Ish offers a hint in his published letters, where he writes, “Ein kol eitzev ba’olam lemi shemakir ohr ha’oros shel ha’emes. Those who perceive the light of truth have no sadness.”

The Chazon Ish was one of those people. We can all be among those people and always find reason for joy, especially during Adar. Even when things aren’t going well, there are always things to be thankful for. We need to consider them instead of floundering in self-pity and sadness, which don’t do us any good.

Sadness is one of those things which feeds on itself. It is very difficult to climb out of a rut. Being positive gives us the power and the courage to benefit from every moment. As dark as everything seems, there is always some light to reflect on, positive things to remember and be thankful for.

Following the reading of Megillas Esther on Purim, we recite the piyut of Asher Heini, which describes the wickedness of Haman and delineates the reasons we celebrate his downfall. The first line of the piyut begins with an alef, and each subsequent line starts with the next letter of the Alef-Bais, concluding with the letter tof.

The verse that begins with the letter vov states, “Velo zochar rachamei Shaul…” Haman lacked the middah of hakoras hatov and conveniently forgot that the Jewish king Shaul had mercy on his grandfather over 400 hundred years prior.

Rav Dovid Soloveitchik, who was niftar last week, explained that we learn from this the importance of possessing proper middos and appreciating benefits we have accrued from others. Although Haman was wicked and desired to kill all the Jews in one day, his lack of appreciation of a favor that was done to his ancestor is recorded to his everlasting demerit.

Let us remember to appreciate those who have improved our world and made it a better place. Let us do what we can to emulate them and follow their example. Besides bringing joy to others, it will contribute to our own sense of simcha.

Let us seek to foster unity and camaraderie. Let us try to be uniters, not dividers; problem-solvers, not creators; joyful, not sad; and positive, not negative; and seek to enlarge our tent, instead of shrinking it. Let’s not be judgmental. Maybe just for this month let’s try to give other people the benefit of the doubt.

Let us do it with dignity and grace; and find favor in the eyes of Hashem and our fellow man. Let us do it so that we merit the geulah sheleimah bekarov. 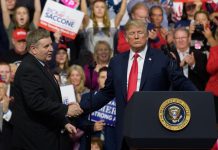