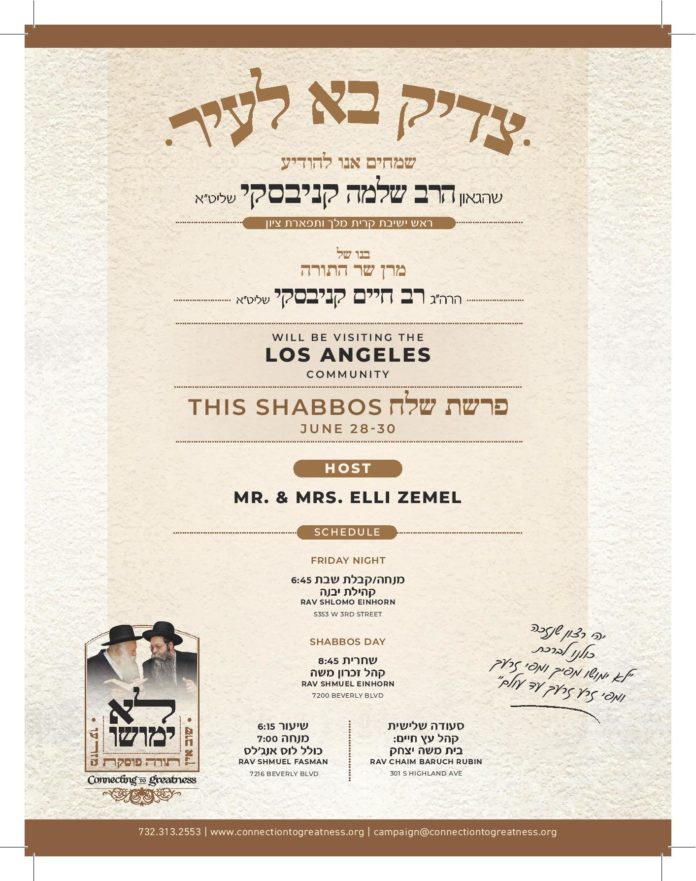 Rav Shlomo Kanievsky, continuing his weeks-long trip to the United States in an effort to save his yeshiva, Yeshiva Kiryas Melech in Bnei Brak, will spend this coming Shabbos, Parshas Shelach, in the Los Angeles, CA, community.

Subsequently, a yeshiva gedolah, named Kiryas Melech, was established and Rav Shlomo served as maggid shiur. He later assumed full responsibility for the financial burden of the yeshiva, following the guidance of his father, Rav Chaim Kanievsky, and his grandfather, Rav Yosef Shalom Elyashiv, to ensure the growth and vitality of Tiferes Tzion/Kiryas Melech. Rav Shlomo then served as rosh yeshiva together with Rav Shmuel Yaakov Borenstein zt”l and presently with ybl”c Rav Yaakov Carp.

The rabbeim and bochurim of the yeshiva benefit from Rav Shlomo’s breadth of Torah knowledge, his boundless ahavas haTorah, his scintillating shiurim, and his personification of the sterling middos for which his forbears have been known. Under Rav Shlomo’s inspiring leadership, the yeshiva has continued to make its mark, educating talmidim with its trademark approach.

But today, the yeshiva is at crossroads. Facing crushing financial realities, funds need to be raised in order to ensure the survival of this Torah citadel. In an effort to rescue the yeshiva, Rav Shlomo is traveling across the world, reaching out to good Jews wherever they may live for their assistance.

This weekend’s visit to Los Angeles comes on the heels of a massive asifa held this week in Lakewood, NJ, as part of the global “Connecting to Greatness” campaign to save Yeshiva Kiryas Melech. The event featured addresses from Rav Chaim Mordechai Ausband, rosh yeshiva of Yeshiva Ateres Shlomo, Rav Bentzion Hakohein Kook and Rav Dovid Cohen.

“The campaign for Yeshiva Kiryas Melech is not simply yes or no, to assist or not to assist,” Rav Ausband stressed. “It’s a campaign for the very vitality of this makom Torah!”

Rav Kook read an unprecedented letter from Rav Chaim Kanievsky in honor of the event, stressing the zechus of participating in this campaign of hachzokas haTorah.

The event will feature the national premiere of “Glimpse into Greatness,” a full length documentary about Rav Chaim Kanievsky.