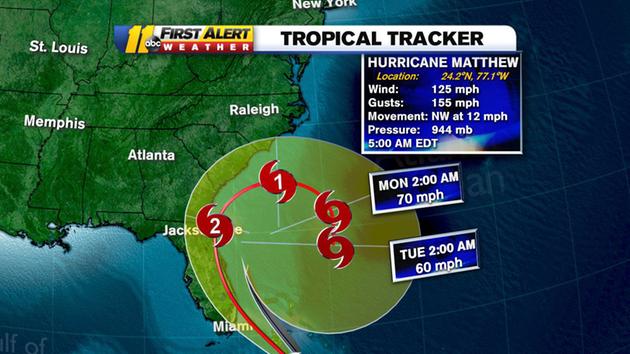 The strongest storm system to threaten the United States in a decade roared toward landfall with Florida on Thursday, forcing hundreds of thousands to flee their homes as the deadly hurricane took direct aim at Florida’s Atlantic shores and threatened further damage up the East Coast.

Hurricane Matthew tore through Haiti this week, causing more than 100 deaths there before moving onto the Bahamas and heading to Florida. While Matthew had weakened at one point, by Thursday morning it strengthened again and surged to a Category 4 hurricane with maximum sustained winds near 140 mph. The National Hurricane Center said the “extremely dangerous” storm will likely remain a Category 4 storm as it hits Florida.

In Florida and beyond, all eyes looked east as the unprecedented storm slowly approached. Officials and forecasters repeatedly stressed the dangers posed by the hurricane, pleading with residents to flee and using increasingly blunt language to describe the perils.

“This is serious,” Florida Gov. Rick Scott, R, said during a briefing Thursday morning. “This storm will kill you. Time is running out.”

Initial rain bands began to reach South Florida on Thursday morning, and Matthew is expected to begin strafing the state late Thursday and grind its way north on Friday, according to the National Hurricane Center. By early Saturday, hurricane conditions could extend into Georgia and South Carolina, the center forecast.

More than 1.5 million Floridians live in evacuation zones, according to Scott. Late Wednesday, he asked President Obama to declare a federal emergency in Florida due to the storm’s “potential to bring devastating impacts to millions of Floridians.” In total, more than 2.5 million people were under evacuation orders from Florida to South Carolina.

Scott has declared a state of emergency in Florida – as have his counterparts in Georgia, South Carolina and North Carolina – and across the state, residents hunkered down as the storm approached.

Schools closed their doors and campuses, universities rescheduled football games and other events, government offices shuttered for the rest of the week. Airlines have canceled more than 2,000 flights scheduled to travel through Florida’s airports on Thursday and Friday.

Floridians either fled their homes or huddled with supplies after making the customary last-minute trips for bottled water, bread and peanut butter. Batteries were gathered, plywood erected and shutters lowered throughout the state. Some people headed to safer ground with friends or family in safer structures, while others planned “hurricane parties” to spend the hours on lockdown.

Scott also activated 1,500 Florida National Guard members, with another 5,000 ready to be deployed as needed.

“Get out now if you are in an area with evacuations,” Scott said in a statement. He added: “If you make a decision not to leave before the storm, we cannot send someone to save you because you made a bad decision. Don’t wait until you lose power. You need to leave before it is too late.”

Forecasters were similarly foreboding in issuing dire warnings for what they called a “life-threatening” storm, the first major hurricane to hit the United States since Wilma in 2005. (Last month, Hurricane Hermine slammed into Florida’s Gulf Coast before quickly being downgraded to a tropical storm.)

The hurricane appears to be without comparison in modern Florida history, and could lead to multi-billion dollar damages across the state, according to the Capital Weather Gang.

In one bulletin, the National Weather Service said gusting wind could have “possible devastating impacts” on the eastern coast of central Florida and outlined possible consequences: “Structural damage to sturdy buildings, with complete roof and wall failures. Complete destruction of mobile homes. Damage may greatly accentuated by large airborne projectiles.”

And, in the most ominous suggestion of how long Matthew’s impact could be felt: “Locations may be uninhabitable for weeks or months.”

As people flooded the roads to get out of town, air travel was severely restricted by the looming storm. American Airlines canceled all flights Thursday through the three South Florida airports – in Miami, Fort Lauderdale and West Palm Beach – as well as flights through Orlando’s airport after 5:30 p.m.

Delta, JetBlue and American Airlines all announced waivers allowing people to change flights traveling through the Southeast, Bahamas and Caribbean without paying any penalty.

Airlines canceled more than 1,400 flights through the United States on Thursday and another 1,200 flights on Friday. The overwhelming majority of these planes were scheduled to go through airports in Miami, Fort Lauderdale, West Palm Beach and Orlando.

While Florida prepared for the country’s first brush with Matthew, other states were also getting ready for the storm to rake across their communities.

South Carolina Gov. Nikki Haley, R, evacuated Charleston and Beaufort counties – home to more than half a million people – and said other evacuations were going to follow Thursday. She also stressed that those who ignore the evacuation orders could wind up putting others at risk.

“For those of you that are wondering whether you should leave or not, I again will tell you that if you do not leave, you are putting a law enforcement officer or a National Guardsman’s life on the line when they have to go back and get you,” she said during a briefing.

Authorities in South Carolina said a driver there was shot and killed by sheriff’s deputies after a confrontation along an evacuation route, according to the Associated Press. Police said the driver knocked down traffic cones at a checkpoint and drove off, and when sheriff’s deputies caught up with him he began shooting at deputies, who returned fire. None of the deputies were injured, but four have been placed on leave.

Georgia Gov. Nathan Deal, R, declared an emergency in 13 of the state’s coastal communities, warning that the storm’s impact there could render travel essentially impossible in much of that area.

Deal on Thursday announced mandatory evacuations in six of the state’s coastal counties, a stretch east of Interstate 95 that has more than 530,000 residents.

North Carolina Gov. Pat McCrory, R, also declared an emergency in 66 counties in the eastern and central parts of that state, where residents are still recovering from heavy flooding just last month.

On Thursday, McCrory said at a briefing that while he’s optimistic given the latest forecasts, the storm will likely still cause flooding and power outages in southeastern counties. The state is moving most of its swift water rescue teams into these parts of the state, McCrory said, in anticipation of heavy flooding.

Central Florida also postponed a scheduled football game against Tulane, while other major games scheduled over the weekend – in Columbia, Miami and Gainesville, Fla. – remained tentatively on the calendar as planned.

The Floridians readying for the storm are a mix of veterans who have been through this before and those unaccustomed to the routines of amassing canned soup, plywood and flashlights. People who headed out to prepare found grocery aisles scraped clean of water and long lines at their local Home Depot.

At a Home Depot near Stirling Road in Hollywood, two employees secured seven sturdy pieces of plywood to the roof of black Hyundai sedan.

“It took us about three hours to get in and out,” Alex Ozenaski said outside a Home Depot in Hollywood while two employees secured plywood to the roof of his black Hyundai. “We had just moved to South Florida when Hurricane Wilma hit in 2005. We weren’t prepared. This time, we are almost prepared.”