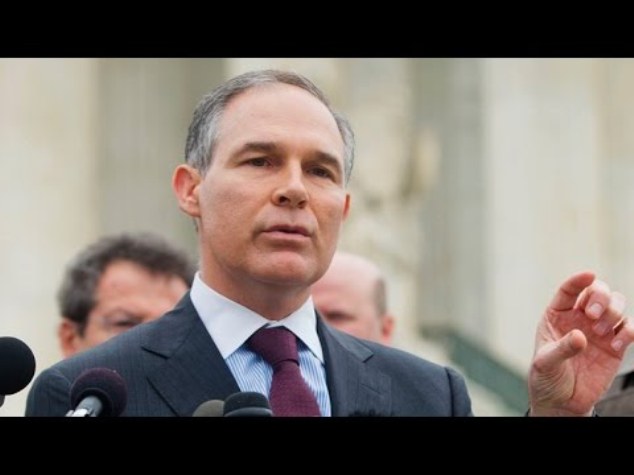 With no mention of the challenges from states such as California, New York, Vermont, Pennsylvania, Oregon, Rhode Island and Washington, Environmental Protection Agency Administrator Scott Pruitt, who previously said he would delay the Oct. 1 implementation date of a rule to lower the level of ozone emissions from fossil-fuel burning, said in a statement late Wednesday that he would now work “with the states through the complex designation process.”

In the statement, Pruitt asserted that the Clean Air Act gave his agency “the flexibility to allow one additional year for sufficient information to support ozone designations,” and said he might take “future action to use its delay authority.”

Pruitt claimed that it became evident early this summer that “underlying complexities, methodological and information questions” would cause workers to miss the deadline. It was not clear whether any of those challenges existed under the previous administration.

One of the attorneys general who joined the lawsuit against the EPA claimed victory on Thursday.

Since entering office, President Trump has sought to roll back rules created by the Obama administration. Congressional Republicans are currently trying to rewrite those rules. House conservatives recently pushed a bill that would delay the implementation of Obama’s ozone rule, finalized in 2015, for eight years on behalf of smokestack industries such as power plants that called it burdensome.

The rule would limit the amount of ground-level ozone – produced when pollutants from cars, oil refineries and other industrial plants react chemically in sunlight – to 70 parts per billion from 75. State health departments, health-care groups such as the American Lung Association and conservation groups link ozone to asthma and other disease that leads to hospitalization and death. The EPA estimated that a drop in the cost of ambulance services, emergency room visits and hospital stays would more than offset the $1.5 billion cost of the rule.

Conservation groups that blasted Pruitt’s decision to delay say they were somewhat relieved. “As he has before, Administrator Pruitt took an action that presented a clear and present danger to public health, and he did it without public input and without consideration of the consequences,” said Peter Zalza, an attorney for the Environmental Defense Fund. “While we welcome this corrective action, we are deeply concerned about the threat that . . . Pruitt’s actions present to the fundamental right to clean healthy air.”