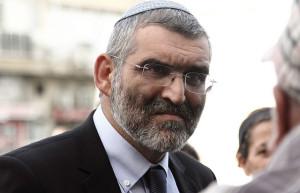 Right-wing politicians on Sunday reacted with anger and left-wingers applauded as the High Court of Justice decided to bar the leader of the far-right Otzma Yehudit party, Michael Ben Ari, from running in the upcoming elections.

There was one dissenting opinion among the nine justices who ruled to disqualify Ben Ari over his anti-Arab ideology and incitement after the Central Elections Committee, which is mainly made up of politicians and is chaired by a justice, narrowly approved his candidacy last week.