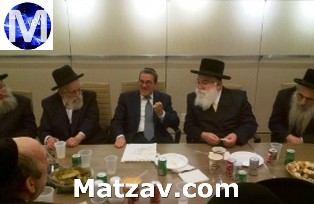 [Update below.] The steering committee organizing the upcoming trip to the United States of the admorim of the Moetzes Gedolei Hatorah of Agudas Yisroel in Eretz Yisroel are considering postponing the much ballyhooed visit until early spring or even the summer due to logistical difficulties of arranging the mass tri-state asifa to protest the Israeli conscription law.

Today, the organizers held their first meeting in the office of Mr. Shlomo Werdiger, president of the board of trustees of Agudas Yisroel of America.

The steering committee of the admorim‘s visit includes representatives of Chassidic courts in the U.S. and Israel, who discussed at the meeting the planned rally and financing of the trip and events.

During the meeting, it became clear that the winter weather severely limits the possible venues to be used for the planned rally, as outdoor stadiums are not options and many indoor arenas are already booked for other events.

Due to these and other difficulties, some participants in the meeting suggested that the visit of the admorim be postponed.

Askanim expressed concern, however, that further delaying the visit after the recent one week-postponement will remove the impact of the trip and the large-scale event. “Having the protest after the passing of the [draft] law in the Knesset” will have little impact, one askan observed.

Update: We are told that despite the logistical difficulties and challenges, and the fact that no venue has yet been decided upon, the event is still scheduled to be held, one way or another, on Tuesday, January 7. Stay tuned.