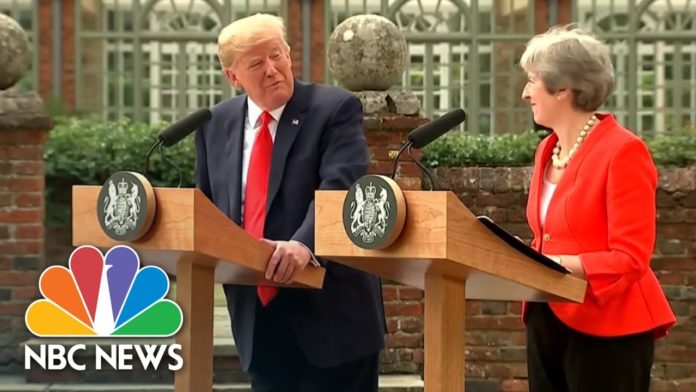 With the showy, royal puffery of the queen’s banquet at Buckingham Palace and tea with Prince Charles over, President Donald Trump turned to business Tuesday, and the possibility of a trade deal once Britain finally leaves the European Union.

In a joint news conference with outgoing British Prime Minister Theresa May, Trump expressed confidence that Brexit would evenually happen. “I think it will happen,” he said, adding: “This is a great, great country, and it wants to have its own identity. . . . I think it deserves a special place.”

May opened the news conference with thanks to “Donald” for cooperation with Britain – for expelling 60 Russian intelligence officers in solidarity after a nerve agent attack on British soil; for carrying out airstrikes in Syria following the use of chemical weapons; and for promoting the idea that NATO members should be sharing the security burden. She signalled Iran and the Paris Climate Agreement as notes of difference. In a line that might refer to Brexit as much as transatlantic relations, she said, “I’ve always believed that cooperation and compromise are the basis” of relationships.

Trump was asked a question about the opposition Labour Party leader Jeremy Corbyn, who was addressing protesters outside. Trump didn’t seem to understand and answered with comments London Mayor Sadiq Kahn, with whom he has had an ongoing fued. “I think he’s been a not very good mayor, from what I understand,” Trump said.

Earlier Tuesday, Trump co-hosted a morning round table of American and British corporate executives, alongside May, meant to kick-start discussions for a deal the president is eager to cut.

Trump has talked up a trade pact with a post-Brexit Britain from the start of his presidency, often putting May in a tricky spot, since Britain cannot fully negotiate a deal while still a part of omnibus European Union trade arrangements.

“Great love all around. Also, big Trade Deal is possible once U.K. gets rid of the shackles. Already starting to talk!” Trump tweeted Monday, in the midst of a day of royal treatment that included a lavish state banquet at Buckingham Palace.

In brief remarks at the beginning of the business meeting on Tuesday, Trump said, “I think we will have a very, very substantial trade deal.”

Leaning toward May, Trump said, “I don’t exactly know what your timing is but stick around, let’s do this deal.”

The Trump-May meetings come at an awkward moment. May has been ousted from her post – not by the voters or by the opposition, but by her own Conservative Party, for her failure to deliver Brexit.

May announced her resignation last month. She officially resigns on Friday, and shall be replaced as party leader and prime minister by the end of July.

While policy is mostly taking a back seat to pomp on this trip, the trade deal is Trump’s top priority. His delegation, heavy on family members and staff hangers-on, also includes Treasury Secretary Steven Mnuchin and other officials focused on a trade package.

As Trump sits with the business community, anti-Trump protesters began to mass for a demonstration against the American president.

It is notable that opposition Labour Party leader Jeremy Corbyn will address the crowds. Corbyn and his party are pushing for a general election that could see him lofted into the prime minister’s office.

If that happened – and the current polling says its possible but not assured – then the Trump administration would be dealing with a British leader who is openly hostile.

The anti-Trump rally will see a return of the Baby Trump blimp, which depicts the president as a whiny diapered baby clutching a cellphone.

Some demonstrators have dubbed the day’s protest a “Carnival of Resistance.”

Trump will attend a luncheon with May at Downing Street. British officials have suggested that the Iran nuclear deal, global climate change, and Chinese telecoms giant Huawei will be on the agenda.

Trump will also be given a tour of the underground bunker where Winston Churchill led the country during World War II. The scene has been featured in recent Churchill movies and is a popular tourist site. 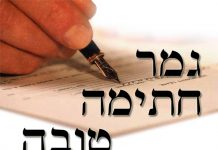