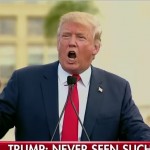 “We are led by very, very stupid people,” he said at a rally against the agreement on Capitol Hill. “We cannot let it continue.”

Speaking after Ted Cruz addressed the crowd, Trump said the United States loses everywhere, remarking that the U.S. can’t beat ISIS and that our nation’s veterans are being treated horribly.

If elected president, Trump pledged to turn the country around. He also said that Americans imprisoned in Iran would be sent back to the U.S. before he even takes office.

“We will have so much winning if I get elected that you may get bored with winning,” he told a cheering crowd.

He referenced a new statement from Iran’s supreme leader, who said Israel will not survive the next 25 years.

Watch a clip of the speech below: